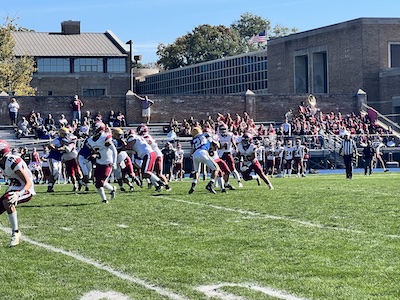 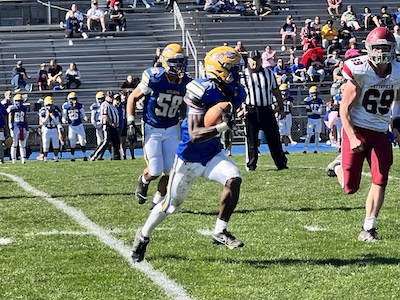 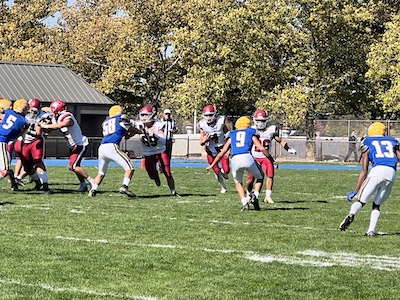 EASTON – Pottsville went on the road Saturday afternoon against Wilson Area and picked up a 39-6 win in a Schuylkill/Colonial Gold Division game at Smith Field.

Joey Palko led the Crimson Tide defense recovering two fumbles and an interception. “Palko did a great job today for us,” said Head Football Coach Tom McGeoy. “He was in the right spots and made plays.”

On the opening drive, Pottsville’s Parrish McFarland rushed for 29-yards on six carries to set up his one-yard touchdown run with 7:06 left in the first quarter. Christian Alvarez’s kick gave the Crimson Tide a 7-0 lead.

Early in the second quarter, the Crimson Tide covered 90 yards in nine plays starting with 11:10 left in the first half. Amaree Bainbridge took the direct snap and capped off the drive when he broke free for a 44-yard touchdown run. With 6:23 remaining in the first half, Pottsville led 13-0.

“We have been using the wildcat the last few games,” said McGeoy. “He made a nice run, broke a tackle, and was gone.”

On the Warriors’ next drive, Pottsville’s Tejay Allen stepped in front of a Jeramy Cressman pass and went 42 yards for a pick-six.

The Crimson Tide capitalized on another turnover. Bainbridge stripped the ball and recovered the fumble on the 49. It took one play. Allen hit Palko, who caught the ball over the defender and went 51 yards for the score.

“That catch over the top of that player was incredible,” said McGeoy. “He stole that interception out of the guy’s hand in the wind. It was a great play.”

It was 26-0 Crimson Tide with 4:37 left in the half. The Defense wasn’t done in the first half. Palko recovered a fumble on the big hit by Zach Ott and they took over on the 36.

“Zach had a nice game and he did a good job on his one-on-one matchups,” said McGeoy. “We wanted to keep the pressure on them and we did.”

Wilson’s Alexander Rooks got a big sack on third down and forced Pottsville to punt.

The Crimson Tide came out of halftime on a mission. McFarland had a big run of 48 and capped off the eight-play, 82-yard drive going in from 12 yards out. They led 32-0 with 8:31 left in the third quarter.

“Parrish had a nice game rushing for us today,” said McGeoy. “He has had a good stretch and is a guy we look to get us going offensively.”

McFarland finished the day rushing for 145 yards and two touchdowns.

The Warriors get on the scoreboard. Christopher Weston threw a dart to Anderson Louis Juene for a 50-yard touchdown pass. Louis Juene’s kick was no good and was 32-6 Crimson Tide with five seconds left in the third quarter.

Pottsville ate up the clock in the fourth quarter and added a late touchdown on a Kole Becker three-yard run. The final was 39-6.