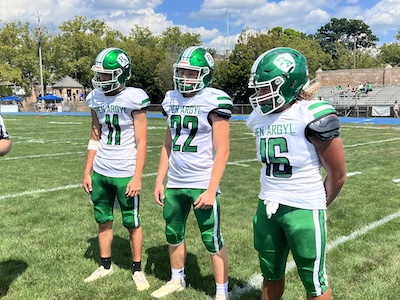 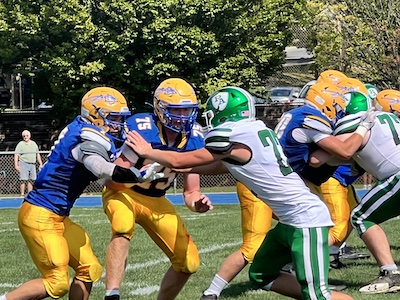 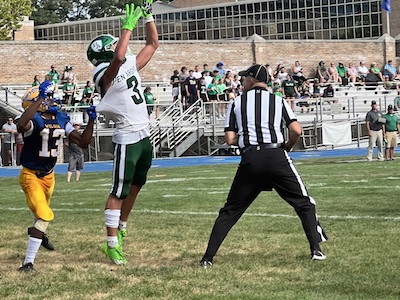 WILSON – The last time Pen Argyl won a football game was in 2020. They went 0-10 in 2021 and Head Coach Brady Mutton talked about how hard the team worked for this game and moment.

“Amazing. You just missed me tearing up,” said Mutton. “These kids worked so darn hard. It’s all about them. They put all this time in and you felt it today.”

The Big Three led the way. The combination of Brad Rissmiller to Damian Tyminski was lethal. Gian Greggo was all over the field making plays on both sides of the ball.

“Gian is a workhorse,” said Mutton. “He would play anywhere on the field if I need him to. He is an amazing player.”

Greggo gave the Green Knights the first lead. He outran the defense for a nine-yard touchdown run. Kris Kessler passed to Damian Tyminski for the two-point conversion. They led 8-0.

Pen Argyl was in cruise control most of the first half until Wilson’s Anderson Louis Juene stepped in front of a Rissmiller pass and went 91 yards for the score.

“He made some mistakes in the first half and he knew it,” said Mutton. “We talked to him at halftime and calmed him down and he made the adjustment and you saw it in the second half.” The Warriors had cut into the Green Knights’ lead 8-6 heading into halftime.

In the third quarter, the Green Knights converted on two fourth-down plays. Rissmiller finished the drive by hitting Tyminski for a 16-yard touchdown pass.

Early in the fourth quarter, Greggo scored his second touchdown of the day. This time it was an eight-yard touchdown run. The Green Knights extended their lead to 22-6 with 9:14 remaining in the game.

The Warriors answered when Juene returned a kickoff 77 yards for a touchdown.

But, Pen Argyl’s defense was too tough all day. They didn’t give up an offensive touchdown or first down until late in the second quarter.

“We knew our defense was going to be our strength of the team,” said Mutton. “The defense played well today.”