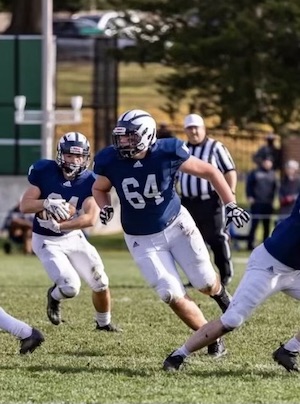 Coaches Comments: “Pacen had an unfortunate injury to start off the season, which slowed him down. But he kept battling and working his way back from that injury and started the back half of the season. What makes Pacen a special player is his smarts and versatility. On offense last year he played both guard spots plus center, on defense he can play all 3 spots up front as well. With his smarts, increased size, and strength we will be shifting Pacen over to tackle this season. He has gotten much bigger and stronger, as you can see with his now 6’4, 275-pound frame. He is expected to be one of the leaders up front. He just recieved his first offer from Davidson and is getting lots of interest from Ivy/Patriot league teams.”