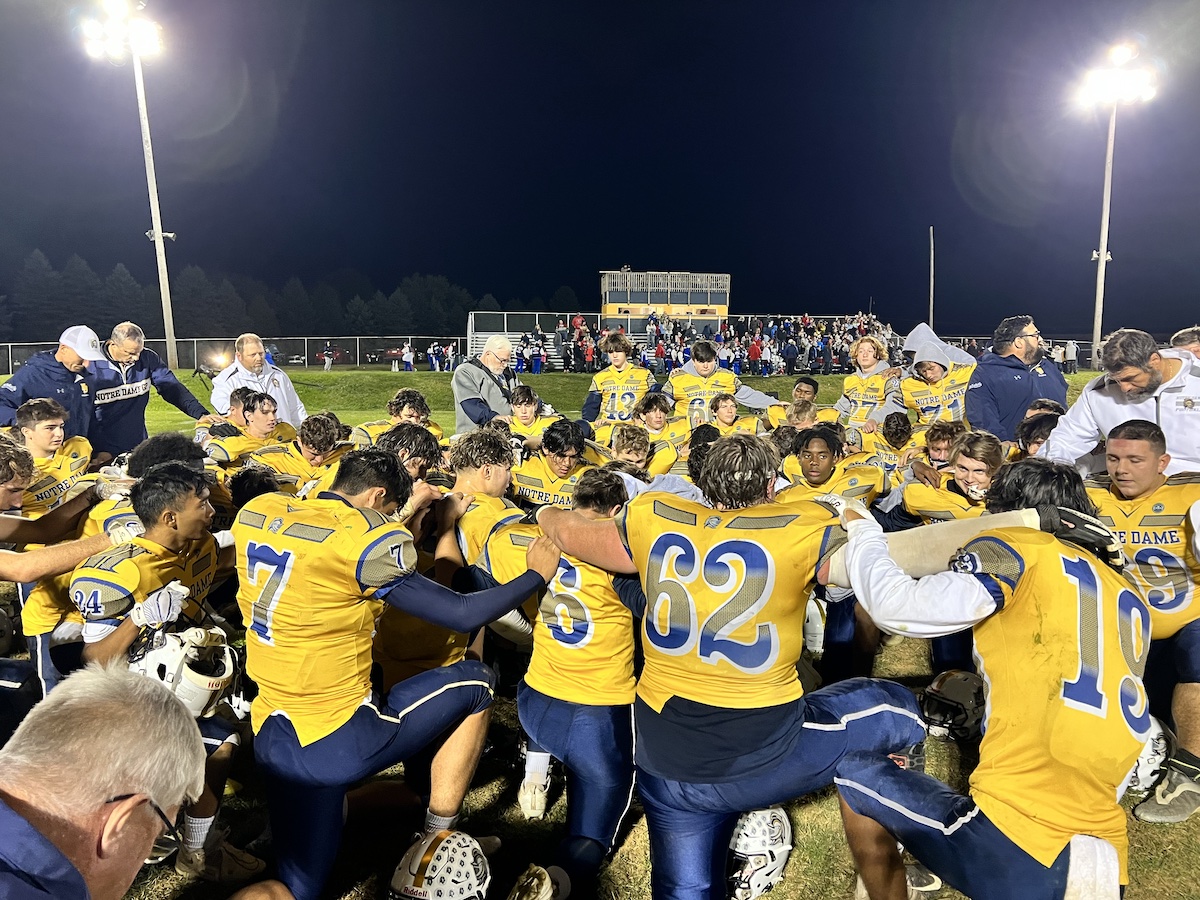 EASTON – The offense, defense and special teams for Notre Dame Green Pond did their jobs in a Colonial-Schuylkill matchup of 4-1 teams Friday night.

The Crusaders’ defense had four interceptions and a fumble recovery. They stopped the North Schuylkill twice on fourth down. They also had a kick return for a touchdown. On offense, the combination of Danny Darno to A.J. Lozano was lethal last night in a 36-24 win for the Crusaders.

“Our game was a title fight,” said Head Football Coach Phil Stambaugh. “We felt this game could put us in the driver’s seat for the remainder of the year. We know they are a tough team over there from the battles we had with them in the past. I am happy our kids were able to turn the tide tonight and I felt this would be a huge momentum shift for the rest of the year.”

Notre Dame Green Pond showed their big play ability right from the start. The first score of the night was a Darno pass to Lozano for a 54-yard touchdown pass with 6:25 left in the first quarter. Faustie Capobianco’s kick was good and the Crusaders led 7-0.

North Schuylkill added a field goal late in the first quarter to cut the lead to 7-3. Gavin Mentzer kicked a line drive 37-yard field goal that just cleared the post.

It looked like the Spartans’ offense was starting to click. They capped off an 11-play, 52-yard drive when Trevor Minalda hit Collin Stanakis for an 11-yard touchdown pass putting North Schuylkill up 10-7 with 10:30 remaining in the first half.

The Spartans looked like they were going to add to their lead on a Jaxson Chowansky touchdown run. But, a holding call negated the touchdown run. A couple of plays later, the Crusaders’ Dainn Vassallo intercepted the ball ending the Spartans drive.

On the very next play, Darno hit a wide-open Josh Ludlow right down the middle for the 68-yard touchdown pass. Notre Dame Green Pond led 15-10 with 5:05 left in the first half.

Right before halftime, the Spartans’ defense got a big stop with 27 seconds remaining in the half and took over on downs. The score at halftime was 15-10 Notre Dame Green Pond.

Late in the third quarter, Notre Dame GP’s defense came up with another big stop and took over on the 48. On the next play, Darno called his own play and ran down to the North Schuylkill eight. Three plays later, Darno hit Lozano for the five-yard touchdown pass. With 10:55 remaining in the game, it was 29-10 Crusaders.

North Schuylkill’s Joey Flail’s 65-yard punt return set up Jared Tinari’s 21-yard touchdown run to cut into the Crusaders’ lead to 29-17 with 6:01 left in the game.

Wow…The Crusaders answered right back. James Wisecarver silenced the Spartan crowd taking the kickoff 95 yards for the touchdown. Notre Dame led 36-17 with 5:23 remaining in the game.

Chowansky added a late three-yard touchdown in the game.

“It felt great to be here to celebrate this with our coaches, kids, and in front of our fans,” said Stambaugh. “The kids are working hard and this is a memory I will have for a long time.”

NOTE: The combination of Danny Darno to A.J. Lozano hooked up three times in the game. Darno passed for 249 yards and 3 touchdowns. Lozano caught six passes for 125 yards and three touchdowns.

“Danny had a great game and I am proud of him,” said Stambaugh.

“Our defense gets undercut a lot because our offense over the years has done so well,” said Stambaugh. “But the kids on defense are selling it out and play hard and our coaches are doing a great job with them. I am very proud of their effort.”