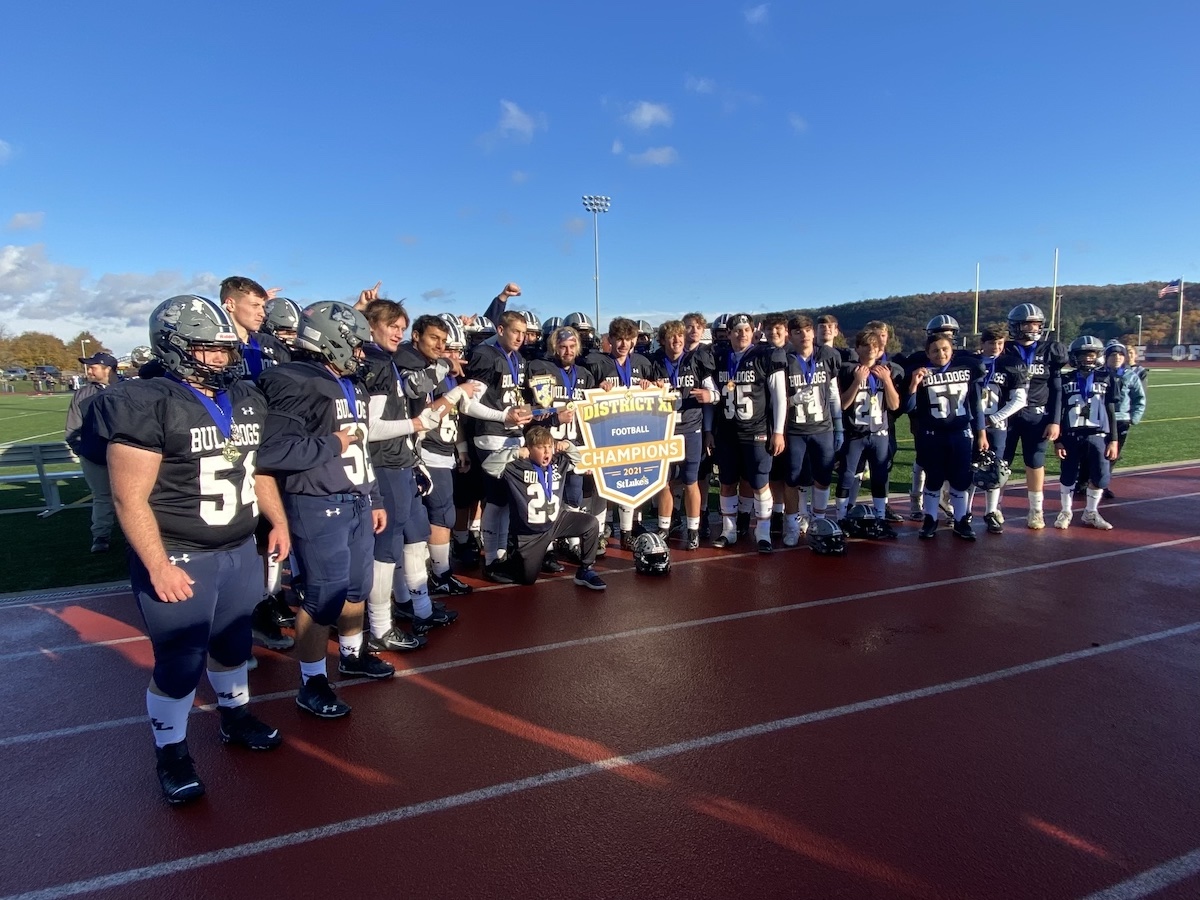 The dynamic duo combined for 403 yards rushing on 30 carries and eight touchdowns. Frame rushed for 331 of the 403 yards and five touchdowns. Amorim added 72 yards in the 64-34 win.

With the win, Head Football Coach Joe Tout knotted his 100th career win at Northern Lehigh. This was the first District title since 2010.

“It’s been our goal since last year to win a district title,” said Tout. “Losing that game at Whitehall to Palisades, we knew we had a special group of guys coming back.”

Next weekend, the Bulldogs will play Lackawanna Trail out of District 2. The Lions defeated Dunmore 14-10.

From the start of the game, Northern Lehigh was in control.

On their first possession, the Bulldogs ran right down the field. Frame capped off the drive powering in from three yards out. On their next possession, it took two plays. Frame took the handoff and went 72 yards for the score. Brett Misera’s kick was good and they led 14-0 with 6:11 left in the first quarter.

Late in the first quarter, The Blue Bombers’ Zack Anthony blocked a punt and Lucas Heydt recovered the ball at Northern Lehigh’s 32. Quarterback Matthew Machalik accounted for all 32 yards and finished the drive with a one-yard touchdown run with 2:05 left in the first quarter. The two-point conversion was no good and the Bulldogs led14-6.

Northern Lehigh’s Ethan Karpowich recovered a fumble at their 42 with 10:16 left in the first half. Dylan Smoyer hit Nick Frame for a 33-yard pass completion down to Palmerton’s 25. Three plays later, Amorim went in from ten yards out The Bulldogs extended their lead, 21-6.

Machalik said not so fast. He called his own play and went 69 yards for the score. The Blue Bombers cut into Northern Lehigh’s lead 21-12.

Like any great fight, you punch and counter punch. The Bulldogs just did that.

They capped off the 11-play, 65-yard drive as Frame scored his third touchdown of the half, this time from one yard out. Amorim’s two-point conversion was good and it was 29-12 with 3:57 left in the first half.

Palmerton scored on their first possession of the second half. Machalik went in from 28 yards out and the two-point conversion is good. The Blue Bombers trailed 29-20 with 10:24 left in the third quarter.

The Bulldog’s offense seemed to set the tone in the second half. They scored on five consecutive drives.

“I made some mistakes there and we were trying to throw a little bit in the first half,” said Tout. The plan coming out of halftime was to ride our horses and we were committed to our running attack the second half.”

The Bulldogs answered right back. Frame did most of the damage rushing for 42 yards on four carries and Amorim capped off the drive with a nine-yard touchdown run.

After a three-and-out by Palmerton, Frame took the handoff and went 54 yards on one play for the touchdown run. With 5:47 left in the third quarter, the Bulldogs led 43-20.

Palmerton still had fight in them. Machalik hit Danny Lucykanish for a 56-yard touchdown pass. Amorim added another score with 3:01 left in the third quarter.

Heading into the fourth quarter, the Bulldogs led 51-26.

Northern Lehigh would extend their lead on A.J. Jimenez’s five-yard run and Frame’s fifth touchdown run of the day, this time for 70-yards.

Harrison Dailey of Palmerton finished the scoring with a nine-yard run.