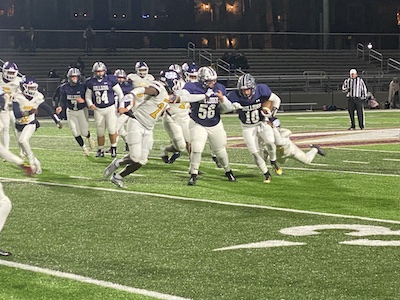 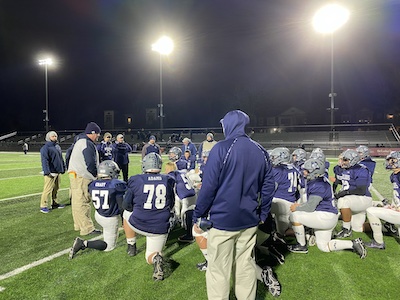 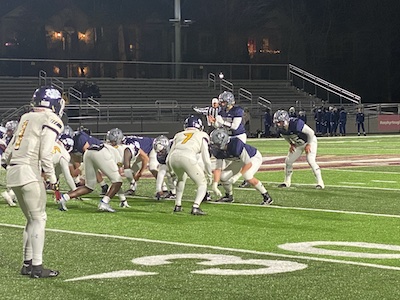 WHITEHALL – Northern Lehigh’s Trevor Amorim scored four touchdowns to lead the Bulldogs in a PIAA Class 2A quarterfinal game against District 12 champion West Catholic. Northern Lehigh’s Joe Tout had his team prepared for a battle to the end. The Bulldogs offense was stellar, but the defense came up big slowing down the Burrs offense in a 48-24 win.

“Our defense won this game tonight,” said Tout. “Our kids tonight were physical and fast to the ball all night.”

With the win, Northern Lehigh (11-3) advances to play District 4 power Southern Columbia (13-1) in next weekend’s PIAA Class 2A semifinal game. The Tigers are the defending state champions who beat Richland 62-20 Friday night.

“We got Southern Columbia next and everyone knows them in Pennsylvania,” said Tout. “We’ll respect them, but these kids are ready for that challenge.”

West Catholic won the toss and elected to take the opening kickoff. Just like every game, the Burrs took a delay of game penalty on their first offensive play of the game in honoring Ivan Hicks who collapsed and died during a 7-on-7 scrimmage back in July. The Bulldogs decline the penalty. Northern Lehigh’s defense made a statement right away stopping the Burrs and forcing a punt on their opening kickoff.

The Bulldogs offense wasted no time scoring. Quarterback Dylan Smoyer threw a halfback pass to Nick Frame who threw a laser to Amorim for a 54-yard touchdown pass. Brett Misera’s kick was good and the Bulldogs led 7-0.

“The key tonight was going to be, I thought, we had to manufacture two scores and we got one with this play,” said Tout. “We hit that against North Schuylkill a while ago and that is one of the things we have done for years, different formations and double passes.”

Another three-and-out by the Burrs and the Bulldogs took over on the West Catholic 49. Smoyer hit Amorim (4-yards) and Misera (11-yards) setting up another scoring drive. The Bulldogs capped off the 49-yard drive with an Amorim 29-yard run to give Northern Lehigh a 14-0 lead.

“We came out fast tonight,” said Tout. “I thought it was going to be a tight game until the end. But this group keeps surprising me. They were lights out tonight.”

After the teams exchanged interceptions, the Bulldogs were on the move late in the first quarter. They were faced with a third-and-seven on the Burrs 22. Smoyer found Austin Smyth for a 22-yard touchdown pass. with 1:23 left in the quarter. The Bulldogs led 21-0.

Early in the second quarter, the Bulldogs were on West Catholic’s 37. Running back Matt Frame took the screen pass, powered his way through several tackles, and went 63 yards for the score. Northern Lehigh extended their lead to 28-0.

The Burrs offense didn’t get a first down until the second quarter. West Catholic finally got on the board when Zymeen Howell made a difficult throw under pressure and hit Naidir Hilliard for the 54-yard touchdown pass. Howell’s two-point conversion made it 28-8 Northern Lehigh,

On Northern Lehigh’s third offensive play in the second half, Amorim fumbled the ball. It was recovered by Hilliard. But the Burrs gave it right back and guess who recovered it, Amorim. Frame had runs of 16 and 15 yards and Amorim finished the drive scoring from two yards out.

“That was huge to get the ball right back and stop any momentum they had,” said Tout. “Amorim and Frame came up big for us tonight.” The Bulldogs, Smyth and Jayden Krempasky, had back-to-back sacks ending a West Catholic drive.

After another punt by the Burrs, Amorim finished a 76-yard, eight-play drive with another two-yard touchdown run. The Bulldogs failed to make the two-point conversion that would have given them a 35-point lead and initiated the mercy rule.

The Burrs offense kicked it in gear in the fourth quarter. K’saan Greene had a 57-yard touchdown run and Jiaire Greene added an 18-yard run.

Smoyer had the final score of the game, a one-yard run, and the Bulldogs moved on to the East final for the first time in 18 years.

“It’s surreal right now,” said Tout. “I thought with this group we had a chance. You’re playing the Philadelphia Catholic League and they have been so dominating in the PIAA. I am so proud of this group.”