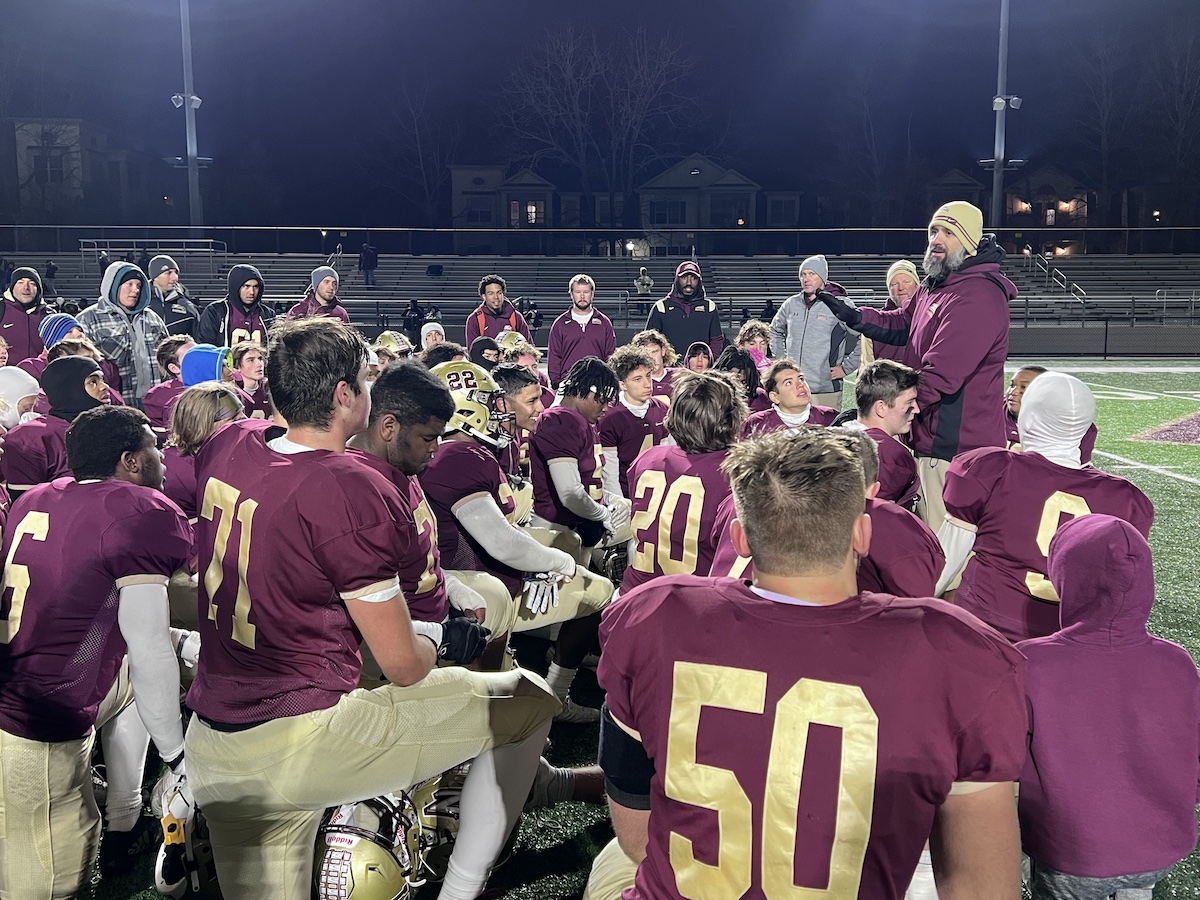 WHITEHALL — It’s been a crazy season for Whitehall. Heading into the District playoffs the Zephyrs lost three of four regular season games. They have now won three straight playoff games, including last night’s opening round of the PIAA State Playoffs.

Nigel Linton’s running attack led the Zephyrs’ offense in the second half. Whitehall pulled away for a 34-13 win in the first round of the PIAA Class 5A playoffs Friday night at Zephyr Stadium.

“I thought our kids played great tonight,” said Whitehall’s Head Football Coach Matt Senneca. “You have to give credit to them. They are a big physical team over there.”

With the win, Whitehall plays either Imhotep Charter or Roman Catholic who play Saturday afternoon out of District 12.

“This was a huge win tonight,” said Linton. “It was our seniors’ last home game and to go out here as a winner tonight is special.”

Whitehall started the game getting the opening kickoff. At mid-field, Delaware Valley’s Jackson Corrie stepped in front of a Trey Dogmantis pass for the interception. The Warriors took over on the 43.

The Warriors kept feeding Paulie Weinrich during the drive as he had eight carries. He capped off the scoring drive by running over a defender and powering in from 11 yards out. The extra point was no good and it was 6-0 Delaware Valley with 5:25 remaining in the first quarter.

The Zephyrs put together a scoring drive of their own. Whitehall got down to Delaware Valley’s 11, but the Warriors defense held. They settled for a field goal attempt and Andrew Deutsch calmly kicked a 28-yard field goal to cut the Warriors lead in half. The score was 6-3 Warriors with 1:48 left in the first quarter. A big sack by Whitehall’s Kaden Weaver on Logan Olsommer ended a Warrior drive.

After a punt by Delaware Valley, Whitehall took over at the Warrior 43 with 11:06 left in the first half. The big play of the drive was an inside screen pass. Dogmantis hit Jack Kocher for a 35-yard completion down to the Warriors 9. Two plays later, Nigel Linton walked in from two yards out. The Zephyrs had their first lead of the night,10-6.

The Warriors answered right back. They put together a 16-play, 66-yard drive and scored with 38 seconds remaining in the first half. Weinrich got his second rushing touchdown of the first half. He powered in from two yards out.

The Warriors went into halftime leading 13-10.

With the lead heading into the second half, the Warriors received the kickoff. The play of the game came on Delaware Valley’s drive. Jayden Ramirez made an incredible one-handed catch and darted down the sidelines for a 59-yard gain on third down and long. But, a couple of penalties ended the Warriors’ drive and they had to punt to Whitehall.

Whitehall was on the move again. After an excellent punt by the Warriors to the Zephyrs 4, Whitehall got the big play. On second down and nine, Dogmantis found Branden Bashore who took the screen pass down the sidelines for a 50-yard gain. Two plays later, Linton ripped off a 33-yard gain.

The Zephyrs were facing fourth and two on the Warriors’ three. But a Warrior offside penalty put the ball on the two-yard line. Dogmantis called his own play, faked left, and went in untouched for the score. Whitehall retook the lead 17-13 with 5:25 left in the third quarter.

It was three-and-out for the Warriors. The Zephyrs’ defense stopped Delaware Valley and the Warriors had to punt.

Whitehall started their next drive on the Warriors’ 21. But the Warriors’ defense held and Deutsch hit his second field goal of the night. On the first play of the fourth quarter, his 23-yard field goal added to the Zephyrs lead, 20-13 with 11:57 remaining in the game.

Linton put the game away with two more rushing touchdowns late in the game. He had scoring runs of 52 and 5.

“I don’t know how much more I can say about him,” said Senneca. “He’s special on and off the field. He had a heck of a game for us tonight.” Whitehall’s defense was strong in the second half pitching a shutout.

“I give our defensive staff, Coach Beller, and all those guys a lot of credit to come out and pitch a second-half shutout against a run game like that. It’s a credit to our staff and kids.”

This is Whitehall’s first District title since 2020. Nigel Linton finished the night rushing for 147 yards on 21 carries and three touchdowns. Trey Dogmanits passed for 177 yards and Jack Kocher caught six passes for 67 yards.

The Warriors finished their season 7-6. Paulie Weinrich led the way rushing for 151 yards and two touchdowns.