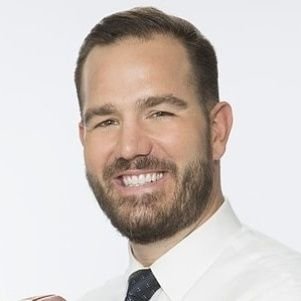 We see him on TV. We hear him nationally on the radio. Ross Tucker seems to be everywhere. The key to
it all is football, and how Tucker has arrived here began with high school football.

At one time, Tucker, 41, was a budding lineman for Wyomissing Area High School. He’s the living embodiment of what you can do when you put your mind to it—on and off the field.

Tucker, a 1997 graduate of Wyomissing Area High School, where he was a three-year starter and graduated with a weighted 4.2 GPA, earning varsity letters in football and basketball, wound up at Princeton, then played seven years in the NFL.

Ivy League to “the league” is a rare path.

Tucker’s journey has a mantra: “No matter what you’re doing in life, you can’t expect to have success unless it’s more important to you than it is to anybody else,” says Tucker, a sideline reporter for Westwood One since 2014, host of the popular Ross Tucker Football Podcast and founder of Go Big Recruiting.

“I say it all of the time. There a lot of people who want to play in the NFL and in college, and it has to be more important to you than it is to anybody else. That’s always something that I’ve always taken with me since I played in high school.

“There are a lot of the things in life that people really want. It’s why you have to make it more important to you than anyone else.”

At Wyomissing, Tucker was all-league at both offensive tackle and defensive end as a three-year starter. At Princeton, he was a four-year starter, starting a few games as a freshman defensive end.

It looked as if Tucker was heading to Wall Street, after accepting a job with Lehman Brothers his senior year at Princeton. But when he tried out for the then-Washington Redskins and made the team, life took an alternate course.

Tucker wound up playing seven years in the NFL for five different teams.

But it was playing for Wyomissing that resonates most with him.

“I’m still grateful to my parents that Wyomissing is where they decided to settle, because the program is so good, and has such a good tradition that I immediately absorbed it,” he said. “One of my first football memories was going to Wyomissing games. Growing up, I didn’t think that much about playing in college or the NFL.

“I thought about it, but I really thought more growing up for playing for Wyomissing. The football players at Wyomissing were kind of like my heroes; I wanted to be like them.”

Tucker would watch them practice when he was in fifth grade. He was a water boy for the team.

“I was all in,” he recalls. “What I took from that was being a part of something bigger than yourself. That was a big thing for me. That, and the value of the time that you put in to get the result that you want.”

“The two things that I tell people is No. 1, I loved playing college football, and I loved playing in the NFL, but football was never more fun than it was in high school. I’d tell the kids today to cherish it.

“Enjoy every part of it, because it’s a truly unique, truly special time of your life. The other part of high school football is playing at the next level, you get three things: the opportunity to continue playing; you can get scholarship money or financial aid for playing, or you can get accepted to a school that perhaps you wouldn’t have gotten accepted to otherwise, like I did with Princeton.

“Any one of those three is terrific, but that last one is big. It’s a truly awesome opportunity if you’re able to use football to go to a school like that.”

Tucker does everything from cover the pros to the high schools. He’s a fixture almost every year at Hershey during PIAA state championship weekend. And he sees a growing trend in the high school game that’s far different than when he played 23 years ago.

The offenses are more open. Tucker says the proliferation of 7-on-7 leagues, off-season passing and quarterback camps has led to that dynamic.

Another huge difference is the size of today’s high school players. By the time Tucker was a senior, he stood 6-foot, 4½-inches and weighed 250. Now it’s commonplace to see a 280-pound high school lineman.

“I don’t know if the kids today are far more skilled, but they’re definitely more skilled than when I played,” Tucker admitted. “A lot of that has to do with off-season camps, whether it’s college or some of these invite camps. Kids are working on their actual skills more so than when I was playing. We didn’t really do the camp thing.

“To these kids today, as long as they’re having fun, and they need to remember, it has to be more to you than it is to anybody else.” 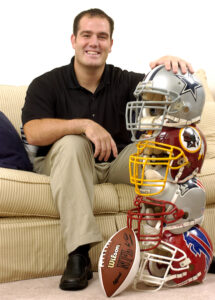 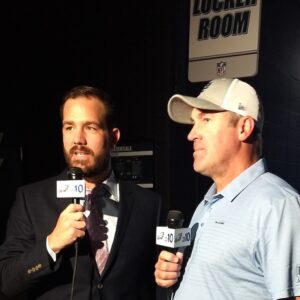 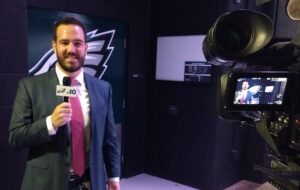