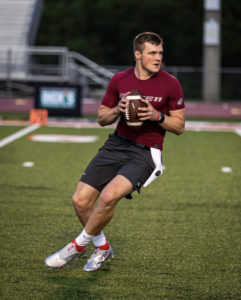 Maxwell Football Club President, Mark Dianno, announced Kyle McCord from St. Joseph’s Preparatory School in Philadelphia, PA the winner of the 2020 Jim Henry Award. The award is named after legendary coach, official, and administrator Jim Henry and is given to a senior football player from the states of Delaware, New Jersey, or Pennsylvania that portrays a unique balance of football prowess, academic excellence, and dedicated community service.

Kyle was active in community service, working on various projects in Philadelphia, PA, South Bend, IN, Syracuse, NY, and Clemson, SC. McCord carries a 3.5 GPA in the classroom and will continue his education and playing career at Ohio State University.

Maxwell Football Club President, Mark Dianno, said “This year’s Jim Henry Winner faced numerous challenges both on and off the field and he consistently rose to meet those challenges. Kyle McCord is a sterling example of the hard work, dedication, and service that have become the hallmarks of Jim Henry Award winners. The winner of the Jim Henry Award is always an excellent football player but must also set himself apart in the classroom and in the community at large. Despite the many obstacles posed by the pandemic, Kyle elevated his academic performance and served several different communities in need. Kyle has indeed distinguished himself, his family, his school, his coaches, his program, and is a well-deserved winner of the 2020 Jim Henry Award as Tri-State High School Player of the Year. On behalf of the entire Board of Directors and all the members of the Maxwell Football Club, we congratulate and salute Kyle on being the 35th Jim Henry Award Winner and wish him much success in his future endeavors.”