Neumann-Goretti moves by Lansdale Catholic, 34-19, to advance to the D1/D12 Region 3A championship 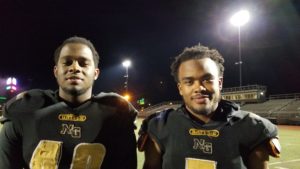 even though the beaming numbers behind him, which his team could see on the distant scoreboard, said otherwise: Neumann-Goretti 34, Lansdale Catholic 19.

Crosby has a bigger picture for the undefeated Saints, and that means going deep into the PIAA 3A state playoffs. He’s won a state title, when he was the head coach at Imhotep Charter. He knows how precise teams have to be, regardless of how talented they are.

So, when Crosby addressed his team Friday night after winning its D1/D12 Region 3A semifinal game, he pointed out a number of things they have to improve—and they are all correctable.

Against Lansdale Catholic, Neumann-Goretti penalties wiped out two touchdowns and an interception. The Saints were flagged 11 times in the first half for 88 yards, though, they did clean that up in the second half, flagged four times for 30 yards.

Neumann-Goretti’s victory sets up a showdown with St. John Paul II on Friday, Nov. 8 at the South Philadelphia Supersite for the D1/D12 Region 3A championship.

One constant that hasn’t changed is the play of Saints’ junior running back/defensive back Tysheem Johnson, who rushed for 125 yards on 15 carries and caught three passes for 56 yards. Johnson, no doubt, will be the focal point of Pope John Paul II (9-2) next week, as he was for the Crusaders’ defense Friday night.

When Neumann-Goretti (11-0) was struggling to fight through the early adversity, it was Johnson that kept them afloat.

“That’s what Tysheem does, he’s a special kid and player,” Crosby said. “He’s a game-changer. But overall, I’m not happy, because I know as a team, we’re better than this. Lansdale Catholic is a well-coached, tough team. But we didn’t help ourselves.

“I know the more we get through this stage, we’ll fine tune things more. But the blame doesn’t fall on the players, it falls on me. I have to do a better job of preparing them. The one thing I liked is how we battled through the adversity (of the first half) to come out on top.”

Lansdale Catholic led once, 13-8, on junior quarterback Jeron Phillips Jr.’s 1-yard touchdown plunge with 7:11 left in the first half. Neumann-Goretti answered back on the next drive when Johnson scored the first of his two touchdowns.

Including the Johnson TD, the Saints reeled off 20 unanswered points and took control of the game.

A key play in that run was an interception and first-ever touchdown scored by Saints’ senior defensive lineman Roman Brown, who picked off Phillips Jr. at the goal line when he tried a desperate pass to get away from Neumann-Goretti defenders.

“This means a lot to everyone on this team,” Brown said. “We struggled, and we had to get the momentum back. We made mistakes and that’s because we have to get more serious during the week. We have a lot of work to do.”

Johnson’s game-changing ability has a habit of erasing many miscues. His versatility makes him almost impossible to stop. He was all over the field, on both sides of the ball, against the Crusaders.

Johnson, like Crosby, has the bigger picture in mind—a PIAA 3A state title.

“I’ve been a little sore and didn’t exactly feel 100-percent, but it feels good to win,” Johnson said. “I was frustrated (by the penalties). We hurt ourselves a lot tonight. We know we’re better than this and it’s going to be up to us to improve.”

Another chance comes on Friday for a district title.

“This time last year, our season was done,” Johnson pointed out. “A lot of guys on this team remember that.”