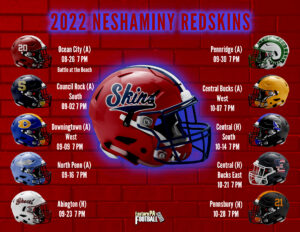 2022 Offensive Outlook: “After going 2-8 last season, our team has a lot to prove. The team returns a good core of its offensive players. Markus Barnett is expected to take the bulk of carries at running back. Travis Lavelah will also carry the ball in addition to playing slot receiver. Colin Baker will take over the Quarterback position, after seeing time at spots last season. In addition to Lavelah, we will have a solid core of receivers to throw to. Newcomers Ashton Lovelace and Jared Molle, as well as returner John Morris, will provide good targets. The strength of the offense should be the tight end position, where returning starters Nick Buchys and Joey Zack will provide great blocking and passing targets for Baker to throw to. The offensive line will be led by 4 returning starters including Charlie Soska, Robbie Haines, Zack Castagna, and Kyle Cunningham.”

2022 Defensive Outlook: “The defensive line will be the strength of the entire football team. Returning starters Jack Dunkley, Nick Buchys, and Joey Zack provide a great foundation to build our defense around. Newcomer Keiran Reardon has worked hard to be an added member of this group. The linebacker group will be relatively inexperienced, with the exception of Inside Backer Joel Bonner. Overall, it is a very willing group that will compete every week. Sophomore Will Sheridan and Juniors Colton Clee and Ryan Yedman will play outside linebacker. Juniors Bonner and Collin Giambrone will play inside. The defensive backfield will be anchored by safeties Demacio Cooper and Adam Goodman. Juniors John Morris and Sean Rearick will be looking to shut down the pass at cornerback.”

2022 Special Teams Outlook: “Sophomore Kaden Nicastro will be looking to take over the kicking duties while Sr. Ashton Lovelace will Punt. With a good core of experienced players, special teams should be a strength.”