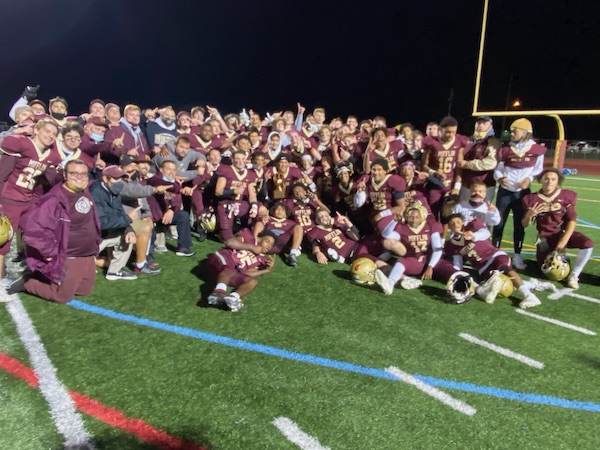 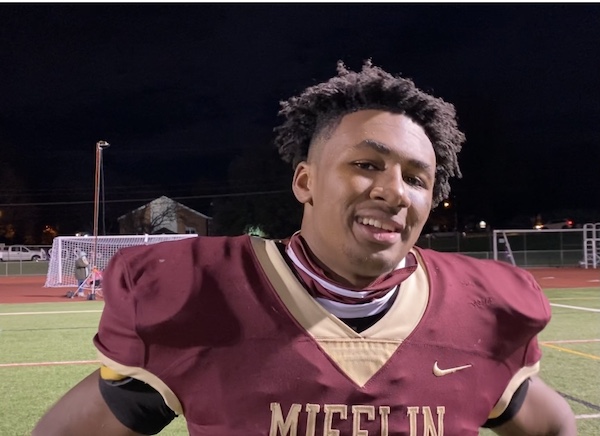 Section I of the BCIAA had a different view this year.  Gone were Conrad Weiser and Twin Valley (both moved to Section II), and Reading, who is not participating.  Enter Berks Catholic, who moved from Section II.  During the previous nine years, the Saints won five Section II titles with a combined record of 45-5.

With a section record of 3-0, Berks Catholic visited the Governor Mifflin Mustangs (also 3-0 in the section) on Friday with the title on the line.  While Berks Catholic was successful in Section II over the last nine seasons, the Mustangs were taking care of business in Section I.  They were 55-2 with seven titles over the past nine seasons.  If this were a boxing match, Mills Lane would’ve said, “Let’s get it on.”  But if this really were a boxing match, it would’ve been a first-round TKO.

Governor Mifflin scored on its first eight out of nine possessions, on their way to a dominating 62-7 victory and another BCIAA Section I title.

After holding the Saints to a game-opening three and out, the Mustangs scored on the second play from scrimmage.  Connor Maryniak (7 of 12, 117 yards, 2 TDs) hit Greg Suber (3 receptions, 53 yards, 1 TD) for a 41-yard pass and run.  Jackson Schools kicked the PAT for a 7-0 lead.

The Saints turned it over on their next possession.  Governor Mifflin’s Brandon Strausser took the handoff on the first play and ran 16 yards untouched for their second score.  The PAT made it 14-0.

After another three and out, and a 19-yard punt, Mifflin had a first down at the Saints 30-yard line.  Five plays later, Nick Singleton (14 carries, 191 yards, 3 TDs) ran in from one yard out.  The extra point gave the Mustangs a 21-0 lead with 4:50 still to play in the first quarter.

Berks Catholic put together a nice drive on their next possession aided by a 43-yard run by Christian Cacchione (10 carries, 57 yards), but a fourth and goal attempt came up short, and Mifflin took over on their own five-yard line.

On the second play of the Mustang’s possession, Singleton ran up the gut, untouched, for a 93-yard touchdown run.  The kick made the score 28-0 with 23 seconds to play in the first quarter, and the rout was on.

Starting the second half, Governor Mifflin took the kickoff and kept their starting offense on the field. However, Maryniak lined up as a receiver and Singleton was taking the snaps in the wildcat formation. Head Coach Jeff Lang said, “We told the team that we were going to run this at some point in the game. During the first half, we didn’t do it, so we needed to get it in.”  Needing only four plays, Singleton finished the drive with a 21-yard run and a 55-0 lead.

Berks Catholic’s score came on a Connor Gundersen 35-yard run in the fourth quarter.  Mifflin’s Brayden Reis rounded out the scoring with a seven-yard run.

Berks Catholic (3-1, 4-3) will travel to Donegal next Friday for their last scheduled game of the season.

Governor Mifflin (4-0, 6-0) will host Mechanicsburg in a District III 5A semifinal, also on Friday.