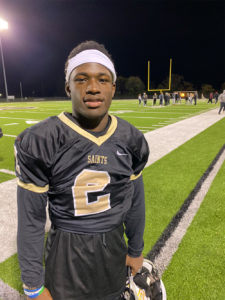 Abdul McFoy rushed for 231 yards and four touchdowns, and returned a kickoff 73 yards for a touchdown, leading the Berks Catholic Saints to a 49-20 victory over the Fleetwood Tigers.

Fleetwood pulled to within 14-7 when Quarterback, Charlie Maddocks connected with his brother, Tanner, for a 26 yard touchdown. On the ensuing kickoff, McFoy scooped up a squib kick at his own 27 yard line, and raced to the end zone for a 21-7 lead. After Berks Catholic stopped the Fleetwood offense on downs, McFoy scored on a 73 yard run. For the record, that is four touchdowns on five touches for Abdul McFoy, and the Saints took a 28-7 lead into halftime.

Defense prevailed in the third quarter as both offenses were held in check. Fleetwood got to within 28-13 to start the fourth quarter as Christian Moreno scored from nine yards out. The PAT was no good. The Saints defense took control from there by causing three Fleetwood turnovers and a failed fourth down attempt. During that same stretch, Berks Catholic’s offense scored on three consecutive possessions; a seven yard run by CJ Carwll, a 20 yard run by McFoy (his fifth touchdown of the game), and a 13 yard run by Colby Newton. Their lead had grown to 49-13 and the running clock was enforced.

Fleetwood scored the game’s final points with six seconds remaining. Christian Moreno took a short pass from Maddocks and ran down the side line for a 50 yard score. The PAT made the final score 49-20 in favor of Berks Catholic.

McFoy said, “I’ve been pretty banged up and this is the first game I’ve been 100%”. Head Coach, Rick Keeley said of McFoy, and his injury, “We had to battle to get to this point. It’s the same offense, with or without him, it’s just more speed with him, so it works better”.

Berks Catholic improves to 4-0 in Berks II, 6-3 overall, and will play unbeaten Wyomissing next week. Asked about the upcoming game, McFoy stayed, “The atmosphere is gonna be crazy. It’s gonna be magical. I can’t wait.”

Fleetwood is 2-2 in Berks II, 7-2 overall, and will play Kutztown next week. 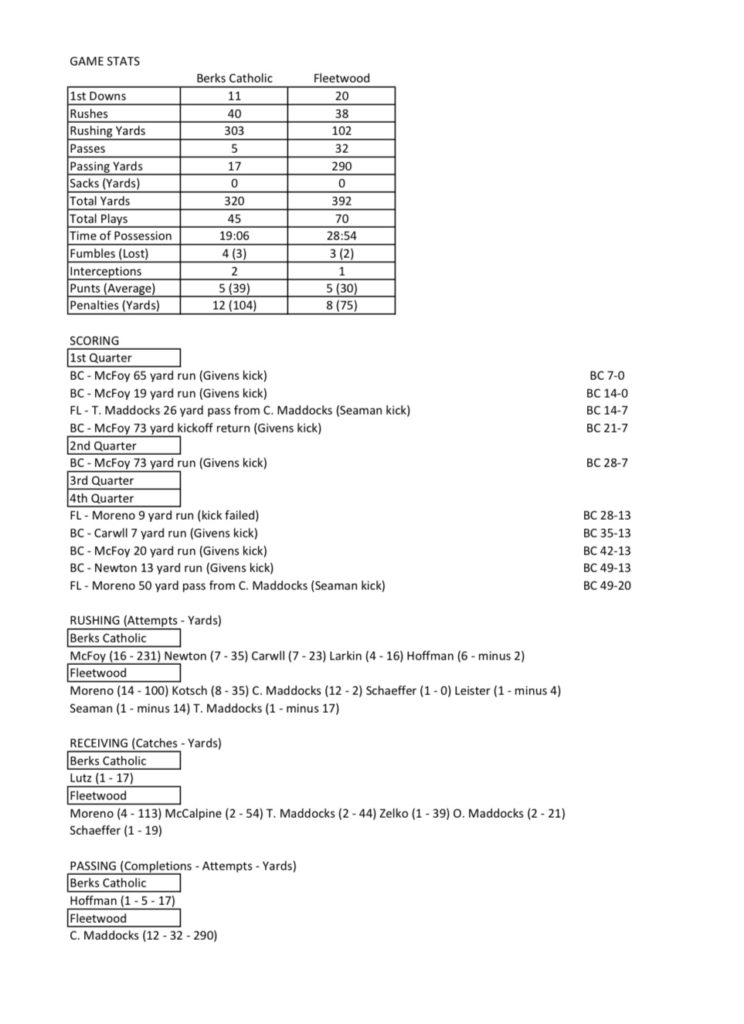