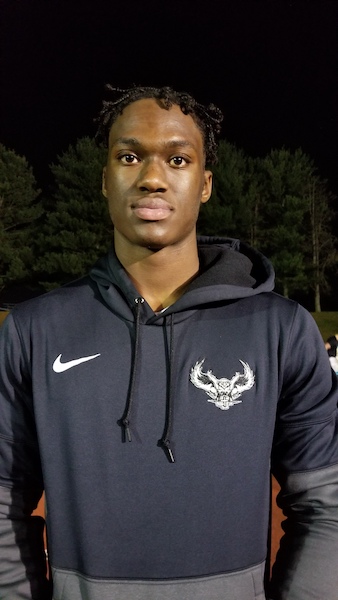 “Marvin is a great young man whose appreciation for the game and his work ethic stands out every day,” Prep coach Tim Roken said. “He was injured in the summer running routes with a cast on his hand. He shows every day and looks to get better himself. He also makes sure the young guys are following in his footsteps.

“Every time Marvin catches the ball, his goal is to get the ball over the goal line every time. When he came here at first (transferring from La Salle), it was about getting used to our way of things and the standard he would be held to. He understood that and rose to the occasion. He’s very mature in how he carries himself on and off the field.”

Harrison himself didn’t know he broke any records, nor didn’t even hear the announcement he broke Fuller’s record after a 37-yard reception in the first quarter. Fuller’s previous mark was 2,380 yards and Harrison was just 10 yards behind entering the game.

“I had no idea, until I came off the sideline and one of my coaches told me,” Harrison said. “I didn’t even hear the announcement, either. The goal is the same, too, winning a third-straight state championship. This season was a little scary. We didn’t think we were going to have a season.

“If I look back on this year, I’ll remember the obstacles we overcame. We didn’t even have a place to practice because of the (COVID-19 pandemic protocols). We want to do something no other Prep has done and that’s win three-straight state titles.”

Prep senior quarterback Kyle McCord, who will be joining Harrison at Ohio State, saw how Harrison has grown in the last few years.

“Marvin is about the team and the team success much more than he is about any individual stats, so it doesn’t surprise he didn’t know he broke the record,” McCord said. “Stats and records don’t mean anything. He’s a team guy, and it’s what makes him so special, because he is among the top-five receivers in the nation and he’s concerned with the team.”