With six minutes and thirty seven seconds remaining in the third quarter, Governor Mifflin tied the game at 14. Cocalico’s Steven Flinton scooped up the ensuing squib kick and raced down the middle of the field for a 76 yard touchdown. The Eagles rode the positive momentum to defeat the Mustangs 26-14 on Friday night in Denver.

Mifflin opened the scoring in the second quarter with a twelve play, 65 yard drive that took six minutes and five seconds off the clock. Nick Singleton and Kolbie Resser each ran the ball six times in the drive with Singleton scoring from three yards out.

Cocalico tied the game on a fourth down play when Noah Palm found Ronald Zahm for a 25 yard passing touchdown with three minutes and five seconds remaining in the first  half.

Mifflin fumbled at their 30 on the next drive and gave the Eagles fifty seconds to work with. On another fourth down play, Palm once again found Zahm. This time it was from six yards out with five seconds left. Cocalico took a 14-7 lead to the half.

In the second half, a poor snap on a Cocalico punt gave the Mustangs the ball on the Eagles 28 yard line. It took two plays for Singleton to run up the middle, make two cuts, and scamper 24 yards to tie the game. That set the stage for the kickoff return for Flinton. The extra point kick was blocked. Cocalico added another touchdown on a 5 yard run by Palm. The two point conversion attempt failed.

This game featured a combined 81 rushing attempts to only 23 passes. It also had a combined ten 4th down attempts. With the win, Cocalico stays perfect at 3-0, and Mifflin drops to 0-3. 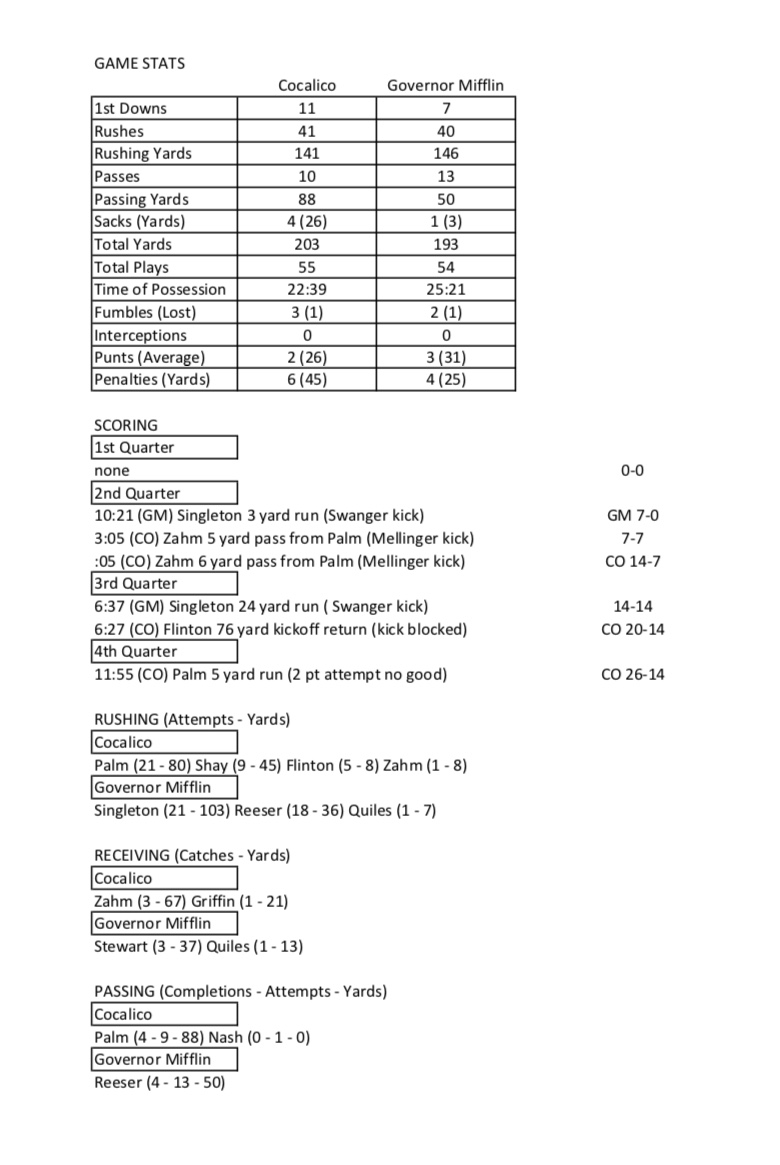