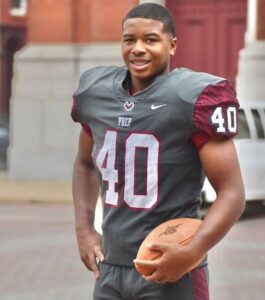 Josiah Trotter admits he had a big load on his mind lifted at 12-noon on Friday, when the St. Joe’s Prep 6-foot-2, 230-pound standout junior middle linebacker made it public by committing to West Virginia.

“This is a big load off my mind because it is one less thing having to worry about my senior year,” said Josiah, the youngest son of former Philadelphia Eagles linebacker Jeremiah Trotter. “I have a job to do. I can focus on football and reaching that next level.

“It’s something I wanted to get off my chest. I feel West Virginia is home for me. Now I have to get locked in for next season and make sure everyone else is locked in. We’re making sure things are together now, instead of later in the season.”

Josiah, considered one of the best high school linebackers in the country, chose West Virginia over Virginia Tech and South Carolina. He told West Virginia coach Neal Brown in March and decided to make it public on Friday.

What is surprising is many recruiting prognosticators speculated Josiah would join his brother, Jeremiah Trotter Jr. at Clemson.

Jeremiah is projected to be Clemson’s starting middle linebacker as a true sophomore this coming season.

“Clemson was a consideration,” Josiah said. “It was a big deal to play with my brother, but we got that chance to play next to each other in high school. Playing in high school with him was a great experience. I spoke to Jeremiah about it, and he wanted me to go with what was best for me. And what’s best for me is West Virginia.

“It’s a good fit. It’s the most comfortable environment. They run a zone defense, which allows the mic linebacker to make a lot of plays. They play a mixture of things, 4-3, 5-2, and they want me to play the mic. It came down to West Virginia, Virginia Tech, and South Carolina. Coach (Brent) Pry (former Penn State defensive coordinator now the head coach at Virginia Tech) was a big factor in that.”

Jeremiah wore his father’s No. 54 at St. Joe’s Prep and now at Clemson. It looks like Josiah will get to wear his No. 40 (his high school number and his father’s college number) at West Virginia.

The Mountaineer program does have ties to the Philadelphia area. Last season, Leddie Brown, a Neumann-Goretti standout, led West Virginia in rushing with 1,065 yards and 13 touchdowns.

Mount Lebanon got in the way last season, beating the Hawks, 35-17, in the Class 6A state finals.

“Now I have to get locked in for next season, and make sure everyone else is locked in,” Josiah said. “We’re making sure things are together now, instead of later in the season. “It did bother me seeing our seniors leave the field without a state championship last year. I saw the time and commitment those seniors put in. I have a job to do this year: Making sure our seniors don’t leave the field like that again.

“It’s about being happy and I feel I’ll be happy at West Virginia. I get to focus on football now.”