Harrisburg over Wilson in District 3 Class 6A Football Final 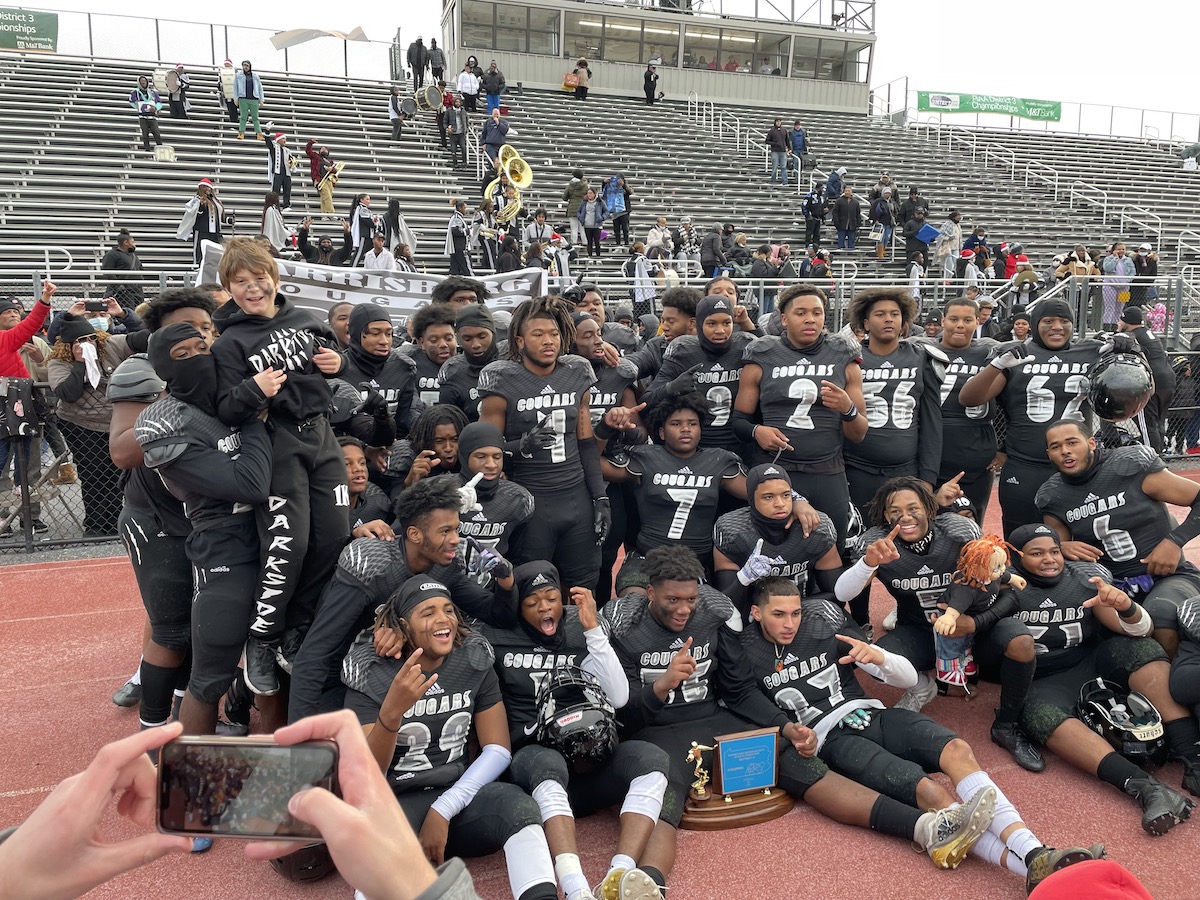 The Harrisburg and Wilson football teams both wanted to do the same thing. Each had power running games, skilled and beefy offensive lines, and wanted to get early leads and control the clock.

Harrisburg entered the game with an eight-game winning streak; Wilson had won seven in a row including an upset of top-seeded Central York last week.

It was a freshman quarterback, Harrisburg’s Shawn Lee, who scored the two touchdowns for the Cougars that propelled them to a 14-10 victory and a District 3 Class 6A championship trophy, the program’s first since 2018 and fourth overall.

“I’m trying to keep it calm, cool and collected until after we leave,” Lee said with a smile. “We had a young team and we have a lot to work on still. But this is a milestone we wanted to reach and we achieved it. It’s time to just keep going.”

The Bulldogs (9-4) started strongly picking up the first five first downs of the game and scored the only points of the first half, a 24-yard field goal from Ben Rada with 1:17 left in the first quarter.

Harrisburg’s bruising running back Mahkai Hopkins got going in the second half after tallying only six yards on three carries in the first. He had 38 rushing yards on the Cougars’ (12-1) opening drive in the third, setting up Lee to sneak in his first touchdown from 1 to give Harrisburg a 7-3 lead with 6:26 left in the quarter.

Wilson running back Jadyn Jones, who finished with 99 rushing yards, answered with a 16-yard touchdown on the next drive as the Bulldogs regained a 10-7 lead with 2:19 left in the third.

Lee fumbled on the Cougars’ next possession and Wilson had an opportunity from the Harrisburg 29 to add to the lead. The Bulldogs gained a single yard on the drive and turned it over on downs.

Hopkins ran 40 yards to Wilson’s 32-yard-line on the next play, then picked up 25 yards on five more carries to put the ball on the 7.

Lee ran around the left side for a 7-yard score on a quarterback option, a perfect play call by Harrisburg head coach Calvin Everett after pounding it up the middle with Hopkins the entirety of the drive. Harrisburg led 14-10 with 9:24 remaining in the game.

Each team punted on their next drives and Wilson forced Harrisburg to punt again with :55 left in the game. The Bulldogs got to the 47, but didn’t have enough time to advance further.

The Cougars head to the PIAA Class 6A quarterfinals to host State College, a 28-19 victor over Delaware Valley in the opening round of the state tournament.

“Just winning,” Lee said about his goals at states. “Even being there is a great opportunity.”

Jadyn Jones with a 16-yard TD run and Wilson is up 10-7 with 2:19 left in 3Q. @EPAFootball pic.twitter.com/mVqlyVywjR

Shawn Lee scores again on a QB option from 7 yards and Harrisburg leads 14-10 with 9:24 left in the game. Wonderful play call as the Cougars had been pounding it up the middle all drive. @EPAFootball pic.twitter.com/IbRzm4aZk8