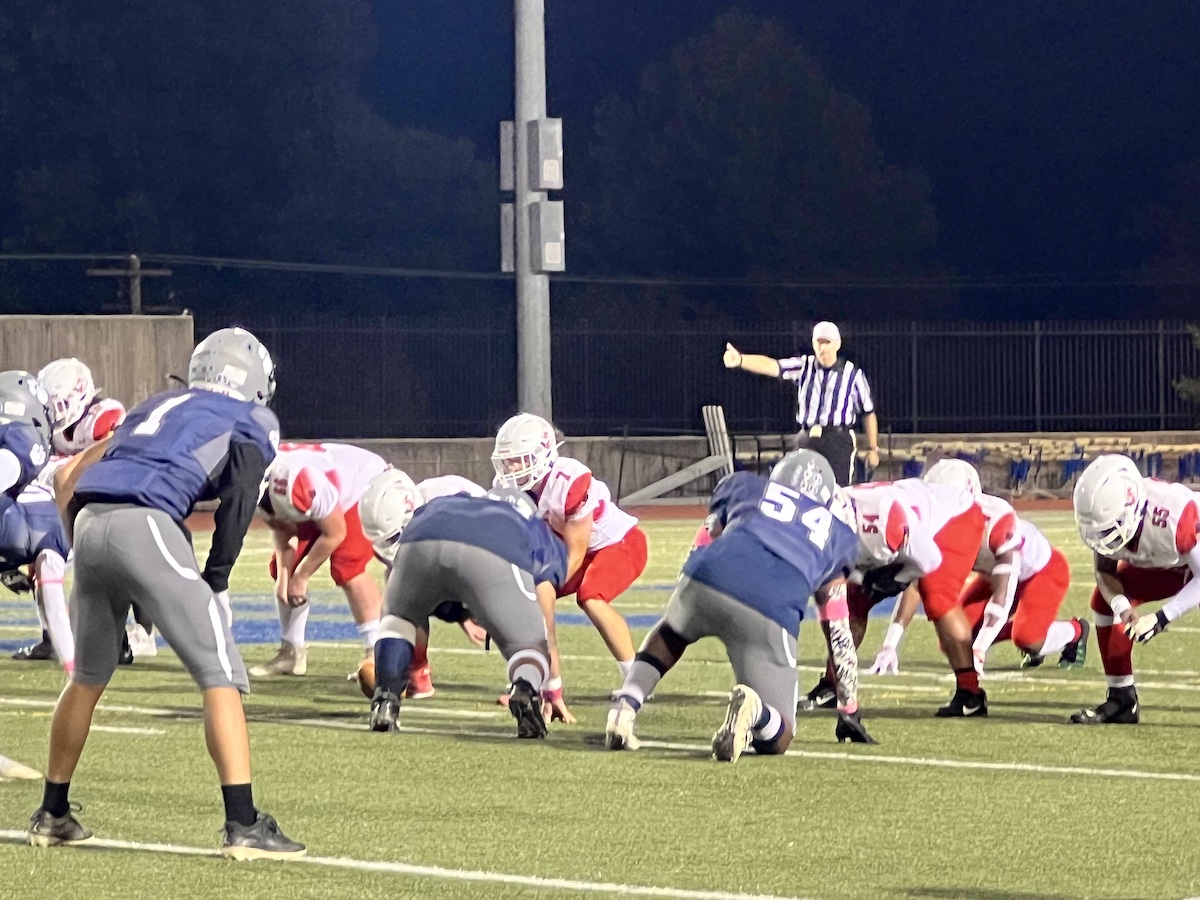 “Jordey did a fantastic job tonight for us”, said Head Coach Dave Luttle “He grows every single week as a quarterback.”

Before the game, the Mayor of Allentown proclaimed October 7th as Dieruff Husky Day in Allentown. Last night, they honored the 1992 Dieruff Football Team, which won the East Penn Conference Championship 30 years ago.

That team was led by Coach Mike Marcks and defeated Allen 32-27 to win the championship.

With players from the 1992 team on hand, Dieruff wasted no time getting on the scoreboard. Noah Ozorio took the opening kickoff and went 79 yards for the score. The two-point conversion was no good and it was 6-0 Huskies with 11:46 left in the first quarter.

“It kind of set the tone for the whole evening,” said Luttle “We knew we can hit them with our big plays and Noah got us off to a great start.”

On the second play of the second quarter, Dieruff’s defense came up big. Jonathan Serrano picked off a Rocco Delgiudice pass and they took over on their 35.

“We preached that all year,” said Luttle. “When you get turnovers on defense, you give our offense the ball and great field position, we can score points.”

During the drive, Mekhi Ashby rushed for 63 yards on three carries and Jordey Guzman finished off the drive with a one-yard touchdown plunge. The score was 12-0 Huskies with 8:27 remaining in the first half.

Dieruff’s defense came up with another big play, stopping the Cardinals’ offense on fourth down and three. They took over on the 44 with 5:10 left in the first half.

All the Huskies needed was one play. Guzman found a wide-open Ozorio for the 56-yard touchdown pass. The lead continued to grow, 18-0 Dieruff.

Again, Pocono Mountain East faced a fourth and sixth with 2:48 remaining in the first half and again, the Huskies’ defense came up big with another stop. Blake Anderson had a huge sack.

They took over on Pocono Mountain East’s 49. After a holding call, the Huskies faced a fourth and 13 on their 49. Guzman found Ozorio wide open again. This time it went 44 yards. Two plays later, Guzman rolled out right and found a seam. He powered his way into the end zone for the score. The two-point conversion was good by Ashby. At halftime, Dieruff led 26-0.

The Huskies started the second half as Ozorio recovered an onside kick on the Cardinals’ 48. They capped off the drive with Guzman hitting Jonas Robles who made an amazing 33-yard touchdown catch. Ashby went in for the two-point conversion. Dieruff led 34-0.

Ashby did most of the work between the 20’s and got in from two yards out for the touchdown run. With 4:10 left in the third quarter, the Huskies led 40-0.

“We got guys that can make plays,” said Luttle. “Ashby did a tremendous job running the ball for us tonight.”

The Huskies’ defense recovered a fumble on their one with 9:40 remaining in the game. Pocono Mountain East’s defense got their first score of the night. Owen Shaffer made a tackle in the end zone for safety. It was now 40-2 Huskies.

With the reserves in, the Cardinals added a late touchdown. Xander Gonzalez capped off the six-play, 42-yard drive. He went in from ten yards out. DJ Kelley had the two-point conversion.