Episcopal Academy wears down Penn Charter, 21-17, in a classic

PHILADELPHIA, PA — The sense on the far sideline was that it wasn’t over. 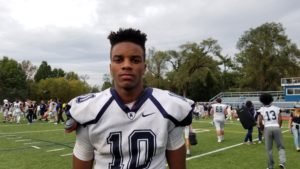 Even though Episcopal Academy had squandered what seemed like myriad chances to blow up its game against undefeated Penn Charter in the Inter-Academic League opener, the Churchmen still held the belief they would prevail.

And with :32 left to play in the far corner of the end zone, after Malcolm Folk’s golden cleats touched just inside of the end zone with a 14-yard Maurcus McDaniel completion, Episcopal Academy prevailed, 21-17, in a classic Inter-Ac game under a gray October sky on Saturday afternoon.

The Churchmen improved to 6-0 with the victory, while Penn Charter lost for the first time this season, dropping to 5-1 overall.

The Quakers did not exactly go down easy.

In the waning moments of the game, a 51-yard completion from senior quarterback Kyle Jones to freshman receiver Colin Schumm placed the Quakers at the Episcopal Academy 17-yard line with :14 left to play. But three incompletions followed and Episcopal survived.

Episcopal has much to bottle and preserve from the victory. The Churchmen were trailing, 17-7, with less than six minutes to play. But there was a physical tax to the Quakers’ lead. Penn Charter players were cramping up throughout the entire second half. The Quakers looked as if they were tiring, while the desperate Churchmen were able to grab a touch of poise to score on their last two drives.

A McDaniel 5-yard TD run put EA within 17-14, with 5:42 to play—and that came after a valiant Penn Charter goal-line stand the previous drive.

Penn Charter was only able to whittle almost two minutes off the clock when EA got the ball again at its 46. The Churchmen converted three third downs, including the game-winning play on their 11-play, 54-yard drive.

“We played some pretty good out-of-league opponents where we had to play a full four quarters of football and we were in football shape, and we were comfortable and they weren’t,” Churchmen coach Todd Fairlie said. “It would have been a real spoiled effort if the score didn’t work out the way it was.

“I felt like they were bigger in every position up front (and Penn Charter was), we kind of hammered them late. I’m a proud coach, because that’s the style we like to play. We just couldn’t finish. Once we got that (McDaniel TD run), we were going to get the ball back.”

Fairlie used the game-winning play earlier, and liked it. So, the Churchmen opted to use it again.

“I knew I was in tight space and I told Maurcus to throw it up there and I would make a play,” Folk said. “I think I had both feet in. we were having out problems. We knew this would be a tight game, and we just kept grinding.”

And finally, McDaniel proved he can be clutch in adverse situations.

The senior rushed five times for 30 yards and more importantly completed three passes for 14 yards—and the key was finding Folk in the corner.

“We were looking for a mismatch on the (game-winning) play and Malcolm told me to have the trust in him,” McDaniel said. “I didn’t know he scored, because I was on my back. I heard the crowd and I saw the ref’s hands go up.

“Everyone was confident. We had the momentum all game. We knew we just had to finish. We can’t be satisfied now with what we did. This wasn’t our biggest test so far this season.” 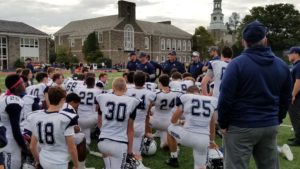