Everyone in blue and white was bouncing up-and-down and hugging. 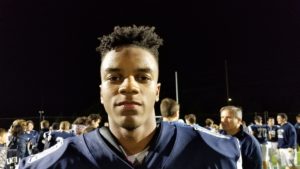 Everyone, that is, except Maurcus McDaniel, who could barely get to his feet, he was so exhausted and hurting.

Episcopal Academy is 8-0 for the first time since 2012, when the Churchmen last won the Inter-Academic League championship outright, after a dramatic 29-27 victory over rival Malvern Prep on Friday night.

The win snapped Malvern Prep’s 16-game Inter-Ac winning streak, dating back to 2016, which was the last time the Friars lost a league game—which also happened to be against Episcopal Academy.

On Friday night, as throughout this whole season, that special player was Episcopal’s McDaniel, the Churchmen’s electric senior quarterback who rushed for a game-high 144 yards on 28 carries, and completed 14 of 18 passes for 128 yards and three touchdowns.

“Maurcus is just unbelievable, and what can say, it’s great to see him end his senior season like this,” Episcopal coach Todd Fairlie said. “These players allow us to coach free, because they play free. They settled in nicely and a credit to Malvern Prep, because they seemed to execute every big play.

“Their last Inter-Ac loss was to us, in 2016. This is a special rivalry. Our kids get up for this game, because Malvern Prep is the standard of the league. There’s really nothing to lose in this game, and it’s a credit to our kids, because they finished the game.”

As has happened at times this season, the Churchmen got off to a slow start. They trailed Penn Charter late in the league opener until the final minutes, and started in an early hole against Malvern Prep, after the Friars’ junior quarterback Lonnie White Jr. took off 42 yards for a touchdown on the second play of the game.

“Our guys have been resilient all year,” Fairlie said. “After the first possession, we did settle in nicely.”

Episcopal scored on three of its next four possessions.

By halftime, the Churchmen had amassed 263 yards of total offense and 15 first downs to Malvern’s 184 yards from scrimmage and seven first downs.

The Churchmen never trailed after Malvern’s initial drive. Though, the teams traded scores, with Episcopal taking a 21-20 edge into intermission.

What set the pace was EA’s 12-play, 7-minute, 9-second drive to begin the second half. The Churchmen didn’t score, but they also kept Malvern off the field for much of the third quarter. The Friars didn’t get the ball until there was 4:51 left. They got a first down, and didn’t get their second first down of the second half until there was less than five minutes to play in the game.

Much of that had to do with EA’s McDaniel, who controlled the game with his legs and his arm.

“(McDaniel) was their offense,” Malvern coach Dave Gueriera said. “How he went, they went, and he was awesome tonight. He runs hard and their offensive line did a nice job on our defensive line. We needed to make a couple of stops and we didn’t.

“Overall, give credit to Episcopal, they played great.”

Led by McDaniel, whose 12-yard scoring pass to Matt Bush and two-point conversion with 9:32 left to play wound up being the winning difference.

“We worked so hard throughout the week and we knew we had to make big plays,” McDaniel said. “We don’t give up. I’ll keep saying it, our will is undeniable. I am exhausted, and I’ll sleep tonight, but this feels good.

“We’re different from the 2012 team, but we have that chemistry and everyone knows their assignment and we get it done.”

The Churchmen have flawlessly through eight games this season with two Inter-Ac games left.