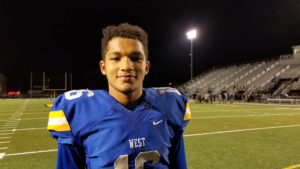 Downingtown West and Downingtown East to combine for 98 points, 881 total yards of offense, 39 first downs and break every scoring record in the 16 meetings between the rival Chester County schools.

That’s what happened Friday, after the shootout at Downingtown’s Walter E. Kottmeyer Stadium.

Downingtown West fumbled away the opening kickoff and was flagged with a penalty in the first three plays of the game. But the Whippets never panicked, never wavered, and never doubted themselves, responding from a horrid start to overcome East, 63-35.

West now moves to 7-0, while East fell for the first time this year dropping to 6-1.

West senior quarterback Will Howard looked like everything he was billed as. He completed 16 of 24 passes for 281 yards and three touchdown passes, against two interceptions. The Whippets pounded East for 21 first downs and 463 yards of total offense.

East accumulated its fair share of offense, too, garnering 418 yards of total offense and 18 first downs.

But once West’s Tyriq Lewis scored on a six-yard run with 1:28 left in the first half, giving the Whippets their first lead, 21-14, Howard and West never looked back.

“I don’t know how easy that was, but I have some special athletes on my side and they showed it tonight,” said West coach Mike Milano, whose team last won a Chest-Mont League National Division title in 2013. “We got in our own way (in the beginning).

“We got punched in the face and we responded.”

West had not only Howard and Williams to thank, but Tyriq Lewis scored four times, Alex Rosano caught a game-high six passes for 130 yards, including a 36-yard TD pass, and Sean Pelkisson and Beau Bryan provided huge sparks defensively.

Pelkisson took a fumble 38 yards for a fourth-quarter score that all but sealed the Whippets’ victory. Bryan was a bull in the middle of the defensive line, shutting down the Cougars’ inside rushing attack and making stops when seemingly no one on West’s defense was able to in the first quarter.

On the other side, East used a strong running game behind senior Spencer Uggla, who rushed for a game-high 152 yards on 27 carries and junior tailback Stanley Bryant, who carried 13 times for 127 yards and rushed for three touchdowns.

“It’s crushing (to give up nine touchdowns, and two came on special teams). I am the special team’s coordinator and I have no one to blame but myself. We have a hard time getting turnovers. Coming in, we only had five turnovers defensively and we get a bunch of turnovers (four) in this game and we lose by a zillion.”

The one constant was Howard.

When the Whippets started off sluggishly, no one said anything on the West sideline. They didn’t have to.

“We knew,” said Howard, who’s looking to leave early for Kansas State. “There was no message that had to be said. We believe in each other. We’re a team that can bounce back from the kind of start we had.

“There was a lot of emotion, but we started executing in the second quarter. Our defense stepped up and played well. We didn’t make it easy on ourselves. We still have work to get done. This was a great steppingstone. It was a good statement win—and we didn’t play our best game.”