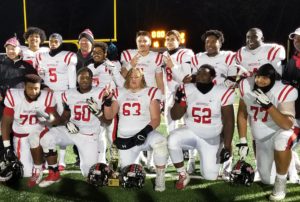 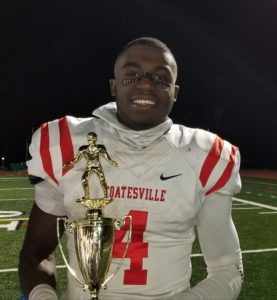 It begins as a slow-forming wave, then gradually turns into a tsunami, laying waste to everything in its path. It’s pretty much the way Coatesville offense has cleared the way to a second-straight PIAA District 1 6A championship and a berth in the PIAA 6A semifinals, where the Red Raiders will meet Harrisburg next week.

Coatesville led from start to finish, with a few bumps here and there, in beating North Penn, 42-13, in the PIAA District 1 6A championship on a frigid Friday night. The game was played at Pennridge High School, behind 172 yards rushing and three touchdowns from star Aaron Young and 125 yards rushing and a TD from junior quarterback Ricky Ortega.

The Red Raiders are now 14-0. Despite the final score, it didn’t start easily.

Coatesville turned the ball over twice in the first half, one a muffed punt by Young and the other an interception on a flea-flicker thrown by Dapree Bryant.

North Penn couldn’t take advantage. The Knights scored once, when quarterback Soloman Robinson connected on a 27-yard TD pass in the second quarter to junior RJ Macnamara. Macnamara played very well for North Penn on both sides of the ball. He added a cosmetic score late in the game.

“We came in at halftime, wanted to dominate, and that’s exactly what we did,” said Young, who scored on TD runs of 57, 53 and four yards and even added an eight-yard touchdown pass on a “Philly Special” play with :10 left in the first half. “We put some points on the board and came out and finished. This was a collective team win. That’s what I liked the most. I didn’t like the turnovers we had, and we have to clean that up. We expect to play better.”

That’s kind of frightening, considering the Red Raiders came out at the half scoring on their first four possessions: A Bryant nine-yard TD run, set up by a Young 65-yard kickoff return to begin the third quarter. They also had a 53-yard Young TD run, a 47-yard Ortega TD run, and a four-yard Young TD run.

“Our running with the inside zone is one of those things where we grind it and grind it. Once we get that one rip from Aaron, behind a special line, and our receivers are unbelievable blockers down the field, we’re able to make those kinds of runs,” Coatesville coach Matt Ortega said. “In Pennsylvania this late in the year, you have to be able to run the football. That’s what I think makes this team special, because we’re able to run the football.”

That’s when the surge begins—and an overflow of confidence takes over.

“There is pretty much the feeling that we can’t be beat, once we get it rolling,” said Coatesville massive left tackle Ricky Santiago. “After we lost to St. Joe’s [Prep] last year [in the PIAA state semifinals], we found out we can compete with anyone. It doesn’t matter their rank nationally, it doesn’t matter who they have on their team.” “To us, it’s about keeping our pride. We keep on tackling, keep on blocking people, keep on scoring and keep on imposing our will against them. It makes them quit. It’s a great feeling for us.”

Coatesville beat Harrisburg earlier this season, 37-6, but Red Raiders’ coach Matt Ortega says this is much different and much better Harrisburg team than the one the Red Raiders faced in September.

For the time being, the Red Raiders will wait on St. Joe’s Prep.

“What’s next for us is playing Harrisburg, which we played in Week 1, and they’re one of the hottest teams in the state right now,” Matt Ortega said. “That’s our primary focus.”