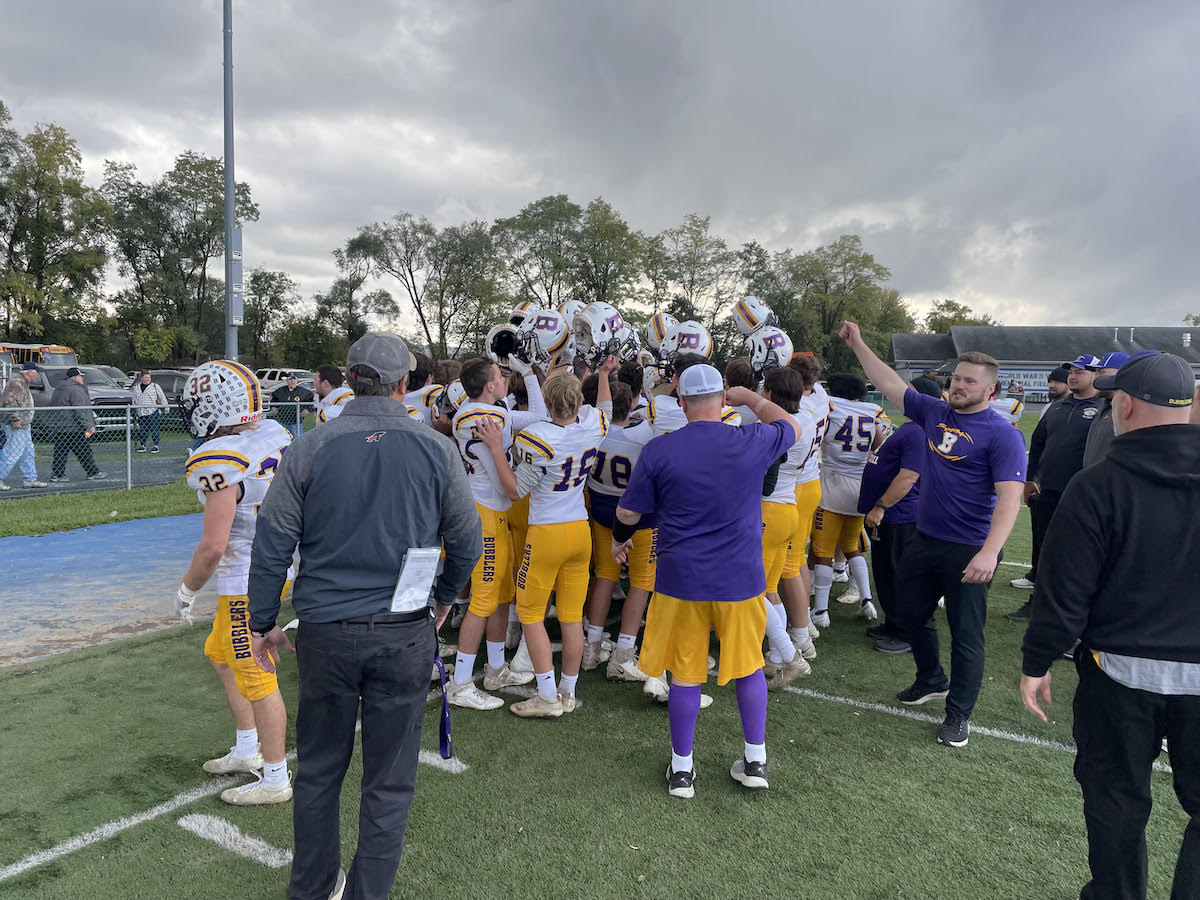 Brad Zell arrived as the Boiling Springs head coach four seasons ago; he inherited a team that went winless in 2016 and 2017. It happened again in 2019.

Seniors Colin Lunde, Aidan Metzger, and Joey Menke have gotten minutes on the Bubblers’ varsity squad since they were freshmen, which was the same year Zell arrived.

The team turned it around in a COVID-shortened 2021 season, going 4-1 and making the District playoffs for the first time since 2015. This weekend showed last year wasn’t a fluke and the team has put the losing seasons behind them.

On Saturday afternoon in Harrisburg, those three players accounted for all four of Boiling Springs’ touchdowns in a 29-28 thrilling victory over Mid-Penn Capital rival Steelton-Highspire to give the Bubblers the outright league title.

“It’s the whole mentality,” Lunde said on what has changed in the program. “We’re just winners, you know? We’re not going to settle for anything less. We give it our all every week. Our standards are just higher.”

On the next drive, Lunde converted a 4th-and-1 on a QB sneak at Steel-High’s 32. He hit Menke for a 31-yard pass to get the ball on the 1 on the next play. Then Metzger pounded it in, but the Bubblers were still down 28-27.

How much thought did Zell put into going for two?

Lunde found junior tight end Blake Develan in the right side of the endzone for the game-winning conversion with 59.8 seconds left in the game. The Bubblers forced a turnover on downs on the Rollers’ next offensive possession and Lunde kneeled it out for the win.

Lunde had 120 passing yards and scores through the air and on the ground, Menke had 97 rushing yards and touchdown and Metzger scored the touchdown to give the Bubblers the opportunity to tie or win at the end.

“We just kept going,” Lunde said. “We never gave in. It would’ve been really easy to throw in the towel after that big play (by Pryor) in the fourth quarter.”

The Bubblers churned out 172 yards on the ground, thanks to a Wing T system Zell brought with him after his time spent at Cumberland Valley.

“I brought what I learned under coach Rimpfel, who just passed away, during my time at CV,” Zell said. “I learned from the best. We are running his Wing T. It’s good to see the kids prosper in a consistent system for four years.”

Zell gave the kids a system they could believe in and they have done the rest.

“The kids have put in a heck of a lot of work,” Zell said. “They are in the weight room three or four times a day. This senior class has been here as long as I have so we are linked together. They believed in what we were telling them and they’re starting to believe in themselves too.”

They have every reason to believe, especially after this thrilling victory over a team that went undefeated and won a state title last season in Steel-High.

“It was a helluva football game, win or lose,” Zell said. “This is good for us. Steel-High is always a tough out. They bring it every week. They provide us with some difficulties because of their speed and their quarterback is a stud. This win is good for our confidence.”

It has all culminated in the Bubblers winning a league title with the district playoffs on the horizon.

“It’s a huge step and milestone for us,” Lunde said on winning the Mid-Penn Capital title. “It means a lot. It’s really big for the community overall.”