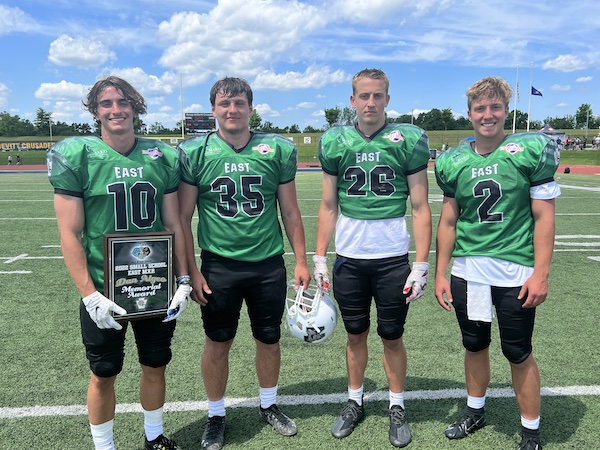 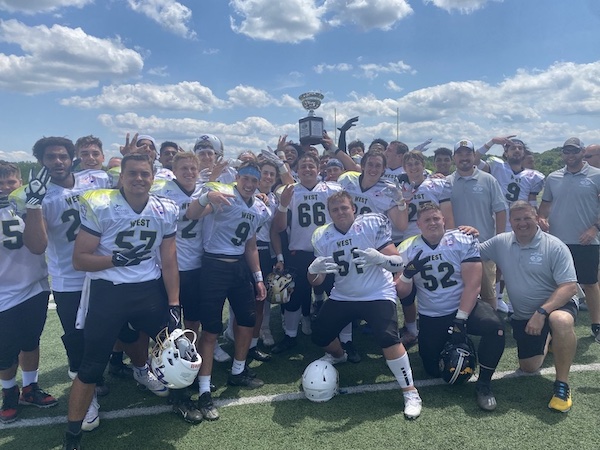 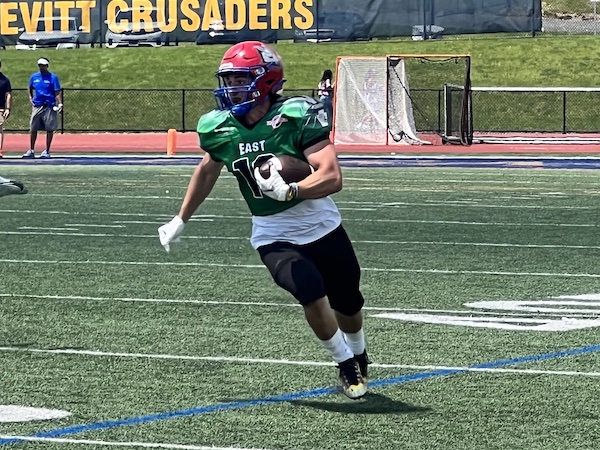 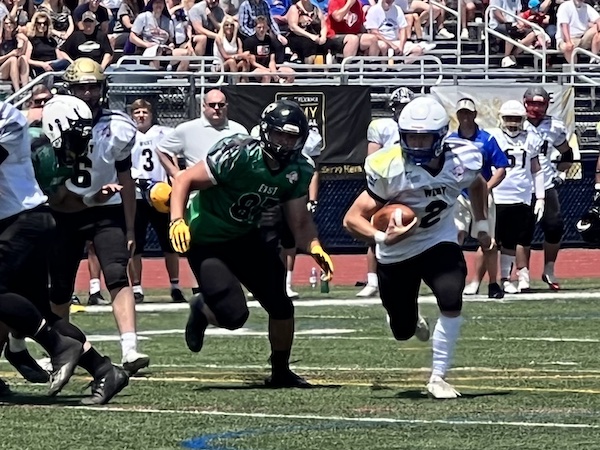 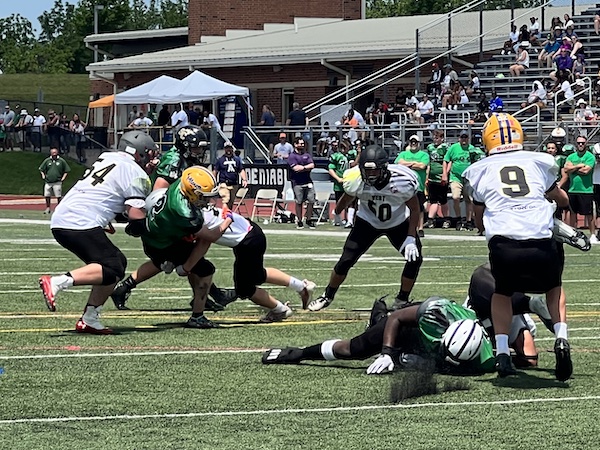 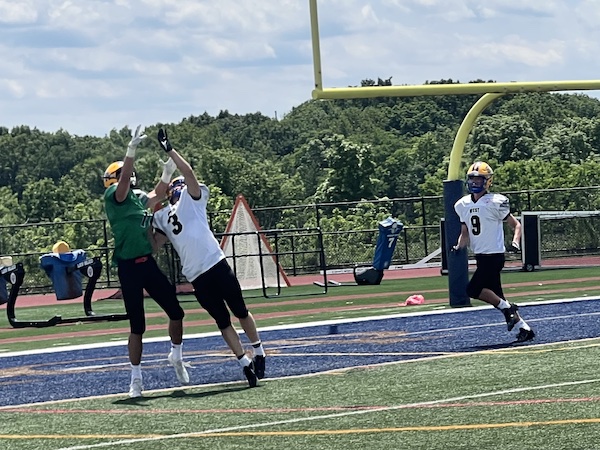 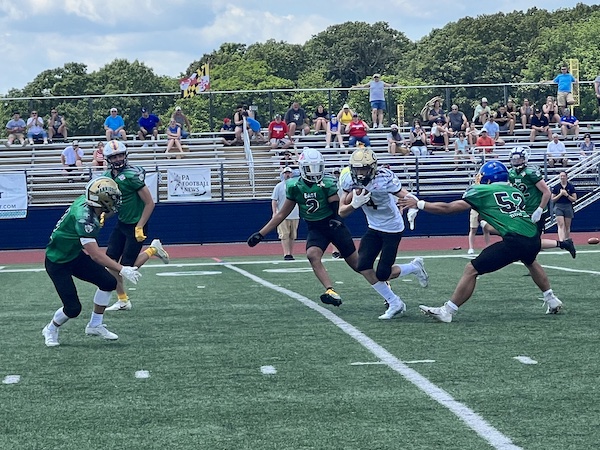 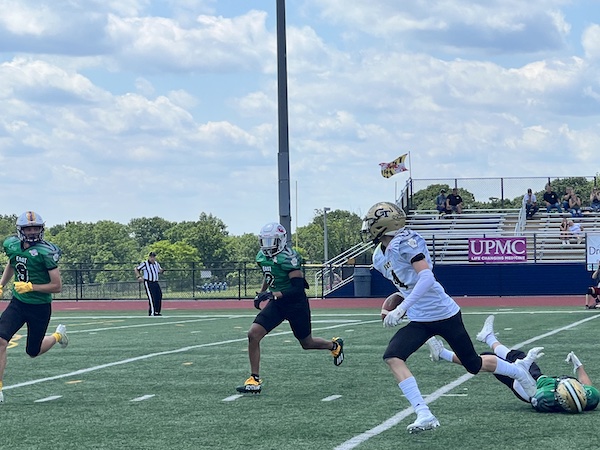 Mercury Swaim hadn’t thrown a football in about six months until yesterday.

The 6-0, 195-pound record-breaking athlete played linebacker and quarterback during his high school career at Bedford, where he is the career leader in points scored, yards, rushing yards and No. 2 in passing yards.

Swaim is headed to Saint Francis to play linebacker in a few months, a position he assumed he would be playing in Sunday’s PSFCA Small School East-West all-star game that pitted a plethora of college-bound players from Class 1A through Class 3A schools on the two opposing sides of Pennsylvania against each other at Bishop McDevitt’s Rocco Ortenzio Stadium.

“No I didn’t know I was going to play quarterback,” West MVP Mercury Swaim said. “For the two days and four practices we had, I played linebacker every single one. Thursday night I learned I was the only quarterback on the roster, Friday I learned the playbook, and Saturday I threw for about the first time in six months.”

The West roster’s other QBs had to back out of the event and Swaim was the next, and only, option.

He threw for 253 yards and two touchdowns and rushed for 89 yards and three more touchdowns on the ground to lead the West to a 49-14 throttling of the East.

“Get thrown into the fire and it’s more of a reaction,” Swaim said. “That was a good thing but also I really enjoyed everyone around me. They were really great. They helped me out so much with my receivers getting open and my line giving me time.”

Swaim started the scoring on the ground with an 11-yarder to give the West a 7-0 lead with 9:29 left in the first quarter.

Northern Lehigh’s Trevor Amorim (Kutztown), who won the East MVP, grabbed a 69-yard touchdown strike from North Schuylkill’s Jake Hall (Villanova) to tie it with 4:09 left in the quarter.

That’s the closest the East would get.

Swaim hit Charney for a 49-yard touchdown with 3:06 left in the first quarter and it ended with West holding a 14-7 lead.

The lead ballooned to 35-7 by halftime with Swaim scoring on runs of 1 and 15 yards and hitting Larue for a 22-yard strike.

Amorim scored his second touchdown on a 15-yard pass from Hall to make it 35-14 with 8:04 left in the third quarter, but the West responded.

Kent, who finished with 64 rushing yards on 10 carries, pounded in a four-yard score with 39 seconds left in the third then Bald Eagle Area’s Garrett Burns scored on a 10-yard scamper with 1:30 left in the game.

Kline had three receptions for 64 yards, Larue four for 50, Charney one for 49, Terry one for 29, Marshall one for 28, Kent one for 20, and Clark two for 13 for the West. Chestnut Ridge’s Matt Whysong (Shippensburg) had four tackles and two passes defended to lead the defense.

Amorim had 93 receiving yards and two touchdowns and led the East with 21 rushing yards; Southern Columbia’s Derek Berlitz (West Virginia) had nine tackles and a sack to lead the defense.

“My mindset was purely just to have fun,” Amorim, who will be majoring in Business at Kutztown, said. “Obviously I wanted to win, but I got to play with my guys one last time and I wanted to have fun with them.”

Swaim, who is majoring in Chemistry at Saint Francis, got one last opportunity to play quarterback on a high school football field.

“It was amazing getting to sling it one last time and it was a really great experience with some great people. I really enjoyed today.”