St. Joe’s Prep closes out another season as 6A state champs 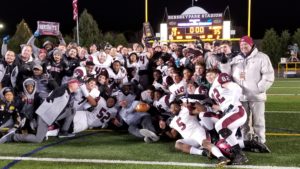 Central Dauphin never find a way to remedy the riddle, and Kolbe Burrell burst free for 189 yards rushing and two touchdowns in leading St. Joe’s Prep to rather easy 35-13 victory over feisty, young Central Dauphin, to claim its second-straight PIAA Class 6A state championship and third in the last four years.

But this year was a little different than the rest.

This season, the Hawks entered the state finals not your typical St. Joe’s Prep team.

Kyle McCord, the Hawks’ Ohio State-committed quarterback, Jeremiah Trotters Jr., the Hawks’ Clemson-bound linebacker, and Anthony Rightley, a senior leader who provided depth at receiver and defensive back, were all due to injuries.

That opened the door for the “Two Matts” to do much of the lifting, with their buddies, junior center Maximus Fisher, senior right guard Casey Stephenson and sophomore right tackle Brad Harris.

There were a lot of thorns in the Pennsylvania high school football king.

“There isn’t a victory that doesn’t come with adversity along the way,” Hawks’ first-year coach Tim Roken said. “There was more so than usual, but that was a blessing for me. I had a staff that wanted to stay together and stay on this mission, making it easier for me to be able to pull myself on the overall program on the kids and the team.

“We showed our resilience and belief in one another as this playoff run began.”

Prep took a 21-0 lead at halftime and never had a concern. Burrell averaged 7.6 yards a carry, and the Prep offense overall churned out 336 total yards.

“We ran what (Central Dauphin) gave us,” Lombardi said. “The game plan was to get it behind us, and you have to give credit for Casey pulling behind us.”

McGeary, a four-year starter who won state titles in three of his four years at Prep, said, “We knew we didn’t want great last week and we had to step it. We believe in Malik (Cooper), and he did a great job filling in for Kyle.

“The rest is a matter of believing in one another.”

St. Joe’s Prep scored on its second possession, but a key moment came when sophomore Maurice Clark scooped up a blocked punt and went 20 yards for a 14-0 lead with 4:21 left in the first quarter.

From there, Prep pounded the Rams attack, holding them to 112 yards rushing on 35 carries. This comes a week after Central Dauphin ran for over 450 yards in its state semifinal victory over Downingtown West.

“We know we’re a team that everyone hates and I feed off the hatred from the state,” McGeary said. “It doesn’t matter where we played, and we overcame everything. I’m so proud of this team.

“It wasn’t easy. People thought it would be easy, because it’s us, ‘The Prep.’ But it wasn’t.”

3 Responses to “St. Joe’s Prep closes out another season as 6A state champs”