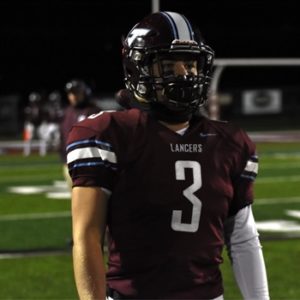 Coaches Comments: Joeb lead our team in tackles this year, racking up 110 as one of three players to break the 100 tackle margin. In addition to his team lead in tackles Joeb also had 8 TFL, 3 Interceptions, 1 Sack, and 2 fumble recoveries. He did this playing out of his natural position on the defensive side as he was forced into action as a true linebacker. Joeb was our H back on offense this year as well. He was very instrumental in all our schemes whether run or pass. Joeb had two touchdowns rushing as well as 172 yards receiving and another two touchdowns in the air. Joeb is one of two players selected as a captain during a junior campaign in my coaching career. He has all the intangibles of a championship leader.