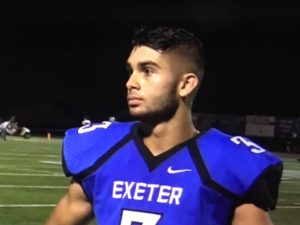 With one minute and eleven seconds remaining in the 4th quarter, Exeter and Conrad Weiser were tied at 21, and the Eagles had the ball at their own 37 yard line. Exeter Coach Bauer called a time out to set up a play. Exeter quarterback, Gavin McCusker (9 of 16 for 220 yards) took the snap and fired a strike to Alex Javier who raced untouched to the end zone for a game winning 63 yard touchdown and a 28-21 lead. Javier stated, “I feel like no one will catch me from behind”. Ty Yocum ended the game for Exeter with and interception, allowing them to run out the clock.

The Scouts opened up a 14-0 lead with 1:17 remaining in the first half with touchdown runs from Owen Dautrich (5 yards) and Dalton Moyer (20 yards). Up to that point it was all Scouts. They had 30 offensive plays for 177 yards and held the ball for 14:21. On the other sideline, Exeter had 12 plays for 15 yards and only 8:22 time of possession. That’s when McCusker found Javier for their first big strike of the game, a 77 yard touchdown that sparked the Eagles sideline going into the locker room, and completely changed the momentum of the game.

In the third quarter, McCusker found JR Strauss from 38 yards out, and Ty Yocum from 11 yards out, as Exeter took a 21-14 lead into the 4th quarter.

The defending Berks I Scouts would not quit. Quarterback Logan Klitsch (20 of 29 for 251 yards) led a nine play, 58 yard drive, finished by a two yard pass to CJ Civiello for the game tying score. After trading punts, Exeter started their final drive from their 20 yard line with 1:39 left on the clock. Three plays later, Javier is off to the races. He finished the game with only two catches, but they accounted for 140 yards and two touchdowns. He also ran the ball ten times for 65 yards.

“We feel great. We fought back. Everybody believed the whole time so I’m really proud of my team. I’m looking forward to the upcoming games. We took one step forward as a team tonight. We have a lot to improve on, but I’m confident in our team that we can run the table”, said Javier. He added, “I practiced quarterback all off season. I barely got any reps at wide receiver. When the season started we transitioned. Gavin and I have chemistry so whatever is best for the team.”

Exeter improves to 2-0 in Berks I and 4-2 overall. They face Reading (2-1, 5-1) next week. Conrad Weiser drops to 2-1 and 3-3. They have a non-conference battle next week against Susquehanna Township. 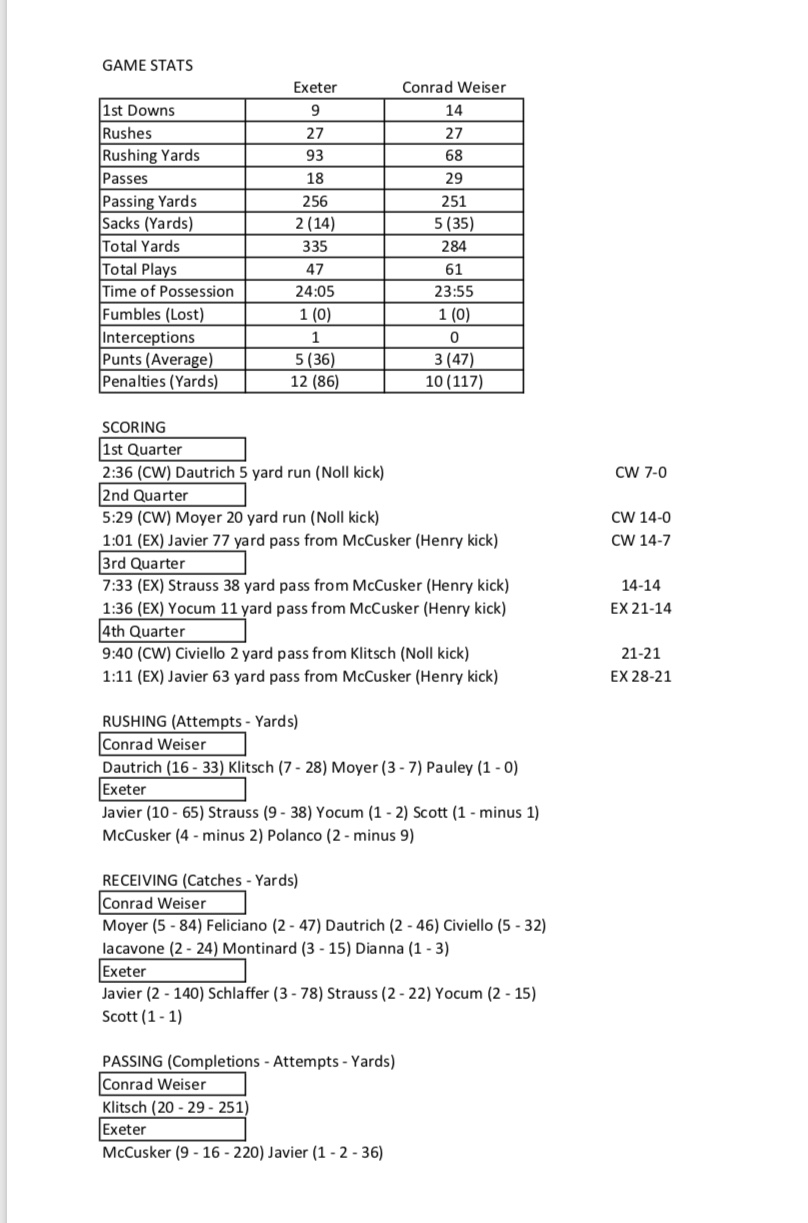