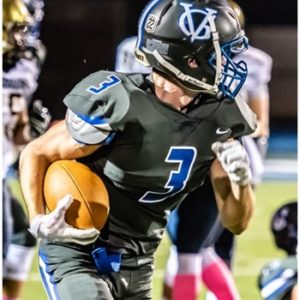 Other Sports: Track and Field

Coaches comments: Jake is an athletic linebacker who can play inside, outside, and play as a stand-up defensive end. His versatility is an asset: he’s capable of setting the edge, rushing the passer, playing inside, and good in coverage. Despite playing in 8.5 games, he had strong numbers as a sophomore. He has a natural ability to get to the ball as a linebacker, runs sideline to sideline well, and is physical. While his primary position is LB, this year he will also play TE. With his physicality, he’s very capable as a blocker and athletic and able to make plays in the passing game. Jake is also one of the leaders on our team and has strong character. He’s worked hard in the off season and is dedicated in the weight room and conditioning. I’d expect with his gain in physical strength and the experience that he had starting as a sophomore that he will have a strong junior year.