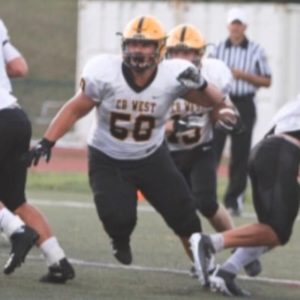 2019 Stats: He was a major piece of an Offensive Line that ran the football for over 3,000 yards last year. He started DL as a 10th grader and played both sides of the ball last year.

Coaches Comments: Jackson is the ultimate competitor. He is tough as nails and embraces coaching in a way that is unique in this era. He desires to be coached hard and in turn his skill set has improved tremendously over my 2 years of coaching him. He will be a 3 year starter which speaks upon his physicality which is a tone setter for us on both sides of the ball. He is a true 1,000lb club member for us Squatting 500lb, Benching 350lb and Power Cleaning 275lb. We believe the sky is the limit for Jackson this season and he will be a dominant force on both sides of the ball in the trenches.