Friday was a day like no other for Southern Columbia junior Julian Fleming. At 10:30 am, in between class periods, the top ranked high school wide receiver in the United States made his college decision public. With a short two minute video clip, Fleming posted on Twitter and Instagram that he would be heading to Ohio State to be a part of the Buckeyes in 2020. “I wanted to get this over with and move on with focusing on my senior year of high school football,” Fleming said.

For the rest of the day, the future Buckeye witnessed first hand what it’s like to be in the national spotlight. “My phone was definitely busy for hours. I had to put it down for a while to get away from it. I had a lot of calls that I didn’t answer because I didn’t know the number. My social media accounts were going non-stop,” said Fleming.

Most kids would have soaked it all in, and can you fault them? A high school athlete seeing their name scroll across the bottom of ESPN, getting messages from famous athletes, and trending nationally with world-known figures on Twitter, why not soak it all in. Not Fleming though. The junior was as modest as one could possibly be. He was content with going to a local restaurant and just chilling with his friends that he has grown up with. “I just like to be with my friends. They are like my brothers, and besides my family mean the most to me,” said the star.

Southern Columbia’s head football coach Jim Roth, who is on pace to break the Pennsylvania wins record in two years, set up a Saturday morning press conference for Julian to answer questions all at once. His 6-2 receiver rolled in about fifteen minutes before it started driving a flashy sports car with the roof down. He got out in gym shorts and a t-shirt and walked in like it was a normal day of school. “My neighbor asked if I wanted to drive it, so I wasn’t turning that down,” said Fleming. The car wasn’t for show, but more of just a view for the outside media to see that Julian is just an average teenager that enjoys live like anyone else.

Fleming became the first ever player from Southern Columbia to be named the Pennsylvania Gatorade Player of the Year back in December, and it was much deserved. The Elysburg-native reeled in 78 receptions for 1,524 yards and had 22 TD’s. Defensively, he was a shut down corner and was a dangerous threat on special teams. You’d have to ask someone else though if you wanted to know about Fleming as a player though, because when talking with him football doesn’t come up. “One of the most impressive things about Julian is that for how good of a player he is, you won’t hear it from him. He handles things maturely and doesn’t brag at all,” said his head coach.

To get ahead of the game, Fleming has enrolled at Bloomsburg University for the ACE program starting in the fall. “Basically our school allows seniors to take college classes to get a head start our senior year. In my case it works out perfect for,” Fleming said. Once football season ends, Fleming will graduate high school early and enroll at Ohio State. “It will allow me to participate in the Spring and learn the new playbook and get adapted to the college life,” said the two-time PA Class 2A Player of the Year.

“I’m excited for the opportunity. I’ve met a lot of great people during the process. I appreciate all the other schools that wanted me to be a part of their program, but ultimately I felt the most at home at Ohio State,” said Julian. Now, he plans on focusing his attention on his Southern Columbia Tigers squad, the two-time defending state champions, as they get ready to make PIAA history. “We want to be the first team in Pennsylvania to win 10 State Champions and we have to put in all the work to reach the goal.” 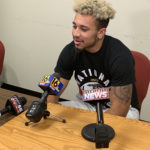 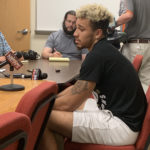