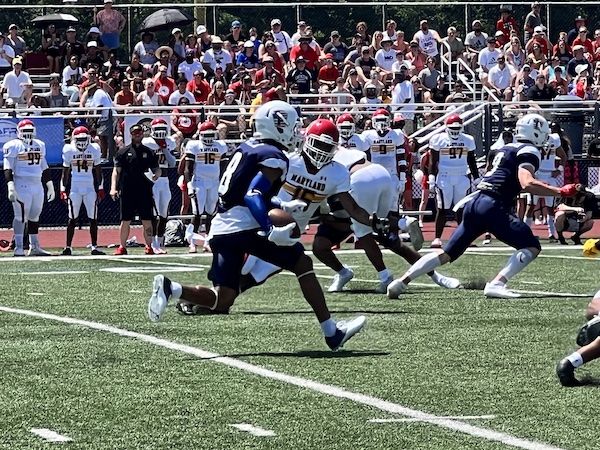 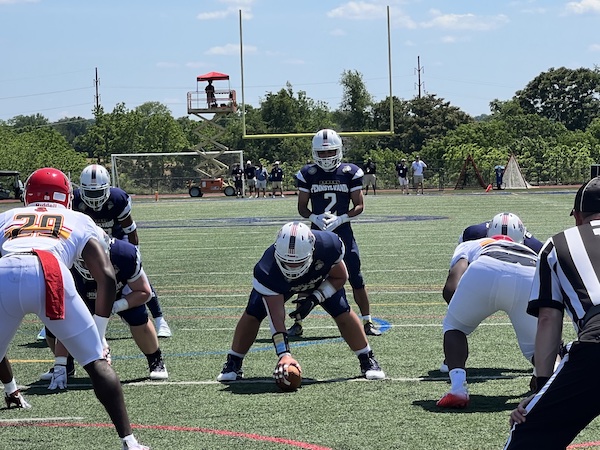 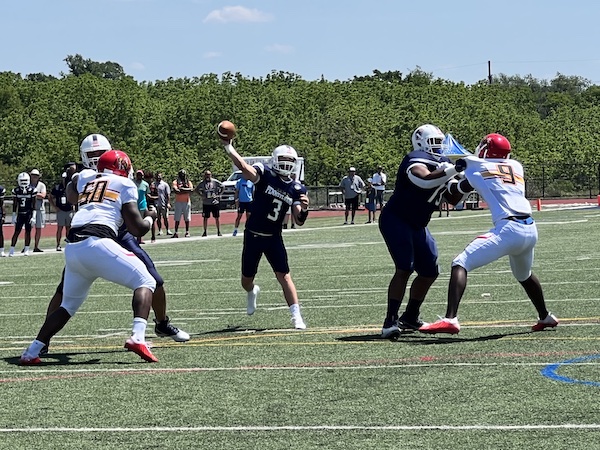 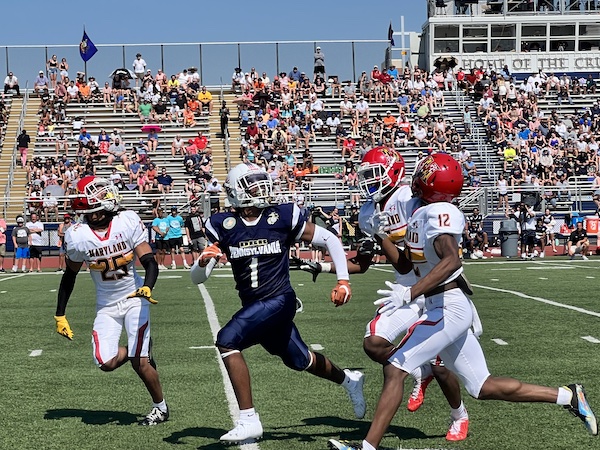 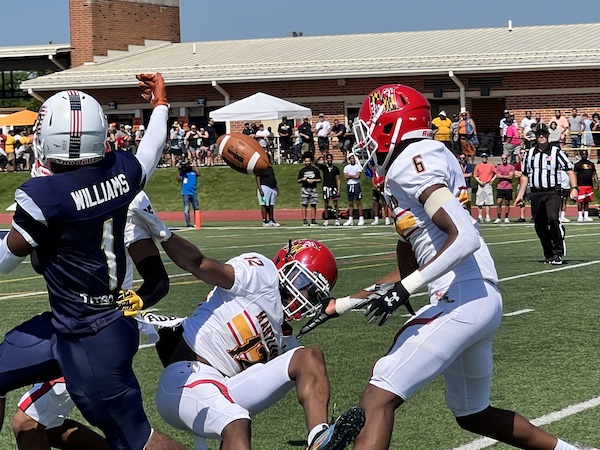 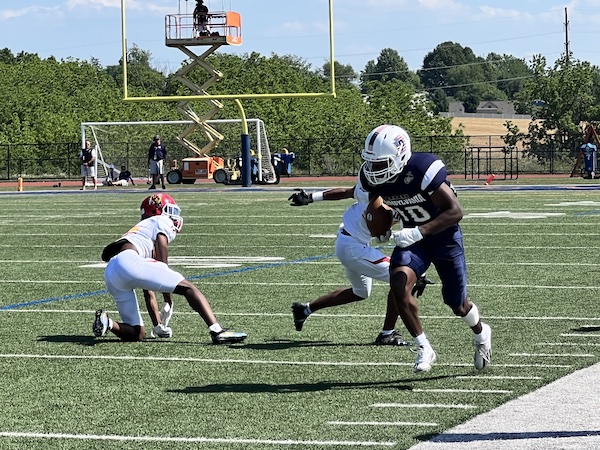 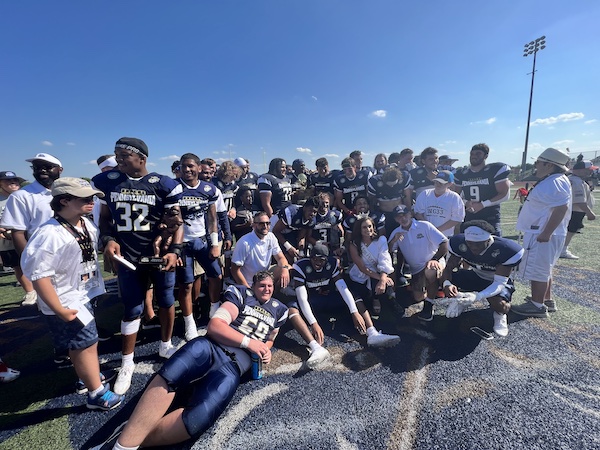 HARRISBURG, PA—Keon Wylie wanted to walk away with something from his high school experience playing football. The 6-foot-3, 210-pound Imhotep Charter senior defensive end saw his season end in a bitter PIAA Class 5A state championship loss to Penn-Trafford, 17-14, in overtime last December.

On Monday, Wylie got his wish.

He walked away with something all right.

Wylie was toting a five-pound award as the Pennsylvania MVP in helping PA defeat Maryland, 28-7, in the 65th Big 33 Classic, played this year at Rocco Ortenzio Stadium at Harrisburg’s Bishop McDevitt High School.

The Penn State-bound Wylie had two sacks and caused chaos all afternoon for the Maryland team.

“This is a nice way to go out, because I didn’t win a state championship and I played in was the All-American Bowl, and we lost that, so it felt good to redeem myself in one last game,” said Wylie, who will be leaving for Penn State on June 12, a day after he graduates. “I wanted to come out here and do my thing. This was fun. We had to go through the trials and different tribulations of learning new plays.”

Wylie has a trophy shelf at home where his new hardware will go. He has no plans on bringing it to Penn State with him.

“This was a good experience with my host family, but there are more challenges ahead at Penn State,” Wylie said.

The Pennsylvania defense was a force the entire game. Putting together the defensive scheme was defensive coordinator Devin Johnson Wylie’s head coach at Imhotep Charter and one of the best defensive minds in the state.

“It was great coaching my guys and coaching all of these talented kids,” Johnson said. “I’m happy Keon got to show what he can do on this stage. This was a great experience, with the coaches from different parts of the state and these kids.

“It’s hard not to be ready with this type of talent. We kept it simple and let their talents shine. I wanted Keon to go after that offensive tackle and make plays—and that’s what he did.”

Pennsylvania went into halftime with a 14-0 lead, thanks to the PIAA Class 6A state champ duo of Mount Lebanon’s Joey Daniels (Dayton) and Eli Heidenreich (Naval Academy).

Pennsylvania took the opening kickoff 57 yards for a 7-0 lead. Forty-two yards of that came Daniels’ passes to Heidenreich.

On the first play of the game, Daniels hit Heidenreich down the sideline for a 32-yard gain. The six-play drive was wrapped up when the PIAA Class 6A state champ duo connected on a 10-yard slant in the end zone on a third-and-goal play.

After one quarter, PA had five first downs and outgained 88 yards of offense from scrimmage to 5 yards of total offense and no first downs for Maryland.

Pennsylvania added to that in the second quarter when Perkiomen Valley

Ethan Kohler (West Chester) hit Heidenreich with a great, arcing 28-yard pass to Heidenreich that put PA at the Maryland 10.

Two plays later, Kohler rambled up the middle of the field for nine yards and a 14-0 Pennsylvania lead.

“We put on a good show today and missed some opportunities on a couple of long ones we could have hit, but our defense was phenomenal,” Kohler said. “They kept giving us the ball in great positions, and our o-line paved the path for our running backs to run behind. We had more in us, but we played well today. With this talent, you have so many smart football players, and we got the system down in two days. I dream for these moments—I had a blast today.”

For the half, Pennsylvania outgained Maryland, 144-62 and produced seven first downs to Maryland’s five.

Pennsylvania’s Penn State-bound pair of Ken Talley (Northeast) and Wylie put on a ton of pressure on Maryland quarterbacks, often forcing them out of the pocket to scramble for yards.

Maryland quarterback Josh Ehrlich (Marist) was running for his life for much of the first half, gaining 33 of Maryland’s 62 yards of offense.

Pennsylvania added to that lead on a 10-yard run up the middle by Mount Lebanon’s Alex Tecza (Naval Academy), which gave PA a 21-0 lead with 1:40 left in the third quarter.

Just when it looked like Maryland was done, Dr. Henry A. Wise Jayden Sauray (Maryland) hit wide-open Dadrian Carter-Williams (Chowan) for a 46-yard touchdown pass, pulling Maryland to within 21-7 with 1:20 left in the third quarter.

“This was definitely a lot of fun and going out with a bang,” Talley said. “I’m getting ready to join my guy Keon at Penn State and I’m going to remember a lot for this. This was as close to college as it gets. Keon is my guy. I’m happy he went out with the MVP.”