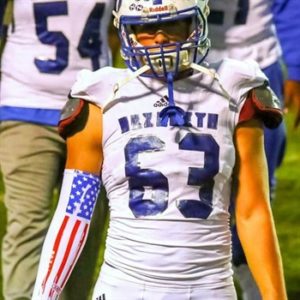 2018 Stats: Jake unfortunately broke his fibula in August and missed 8 games last year. In 3 games recorded 37 tackles. Twenty of those were solo tackles. He had 2 sacks, 13 tackles for losses, and 3 PBU’s.

Coaches Comments: Jake Wilson is one of the hardest workers I have ever coached. After suffering from a broken fibula in the 2018 preseason, Jake returns to the gridiron fully healed and stronger than ever. His engine never stops and he is a true student of the game. Jake’s mix of intelligence, desire, and amazing work ethic makes him one of the area’s most elite defensive ends. We look forward to watching him in his final chapter as a Nazareth Blue Eagle.