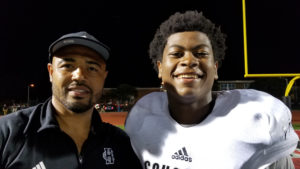 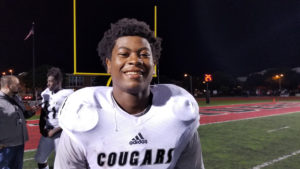 CALN, PA — There’s a good chance no one will be forgetting where Trevion Carey is on the field again.

After playing a key reserve role for Harrisburg last season, Carey, a 5-foot-10, 170-pound wide receiver/defensive back, worked in the offseason to improve. His goal was to make an impact this season, after catching 12 passes his entire junior year.

In the season opening game at Coatesville, in a rematch of the PIAA 6A Eastern final, Carey caught a game-high, nine passes for a career best 91 yards. He made the key play of the game taking a fake punt 16 yards to nail down the Cougars’ 14-6 win.

Carey may be the only one who will savor the game film, because, otherwise, it was a rather ugly game.

Thanks go to Carey for a five-yard touchdown reception near the end of the first half, and John McNeil’s 12-yard TD pass to Kamere Day midway through the third quarter. Otherwise, the Cougars were rather sloppy. They committed 12 penalties for 128 yards, including four personal foul calls.

The Red Raiders were flagged a total of 15 times during the game for 110 yards. They had the ball in the red zone three times and scored once.

Coatesville’s, Villanova-bound quarterback Ricky Ortega was solid, completing 14 of 23 for 131 yards, and ran for 65, including a six-yard TD with 11:26 left to play. But the Red Raiders never crossed midfield again.

That was partly due to Carey, who made six catches during one Cougars’ series. One 20-yard reception came on fourth and 12 which led to Harrisburg’s first touchdown, a five-yard connection between Nicari Williams and Carey. Then, late in the game, Carey, on his own accord, took off 16 yards on a fake punt with 3:45 to play sealing the Cougars’ victory.

“As I was rolling out, I saw a chance and make a gutsy call and went with it,” Carey said. “I wouldn’t have done that last year. I probably wouldn’t have even thought about that (fake punt) last year.

“But they allowed me to do that. When I rolled out, the (Coatesville) guys didn’t even care about me. This was my time to step up. They didn’t care about me, but I have to give credit to Donte (Kent) and Kamere, the two fastest kids in the state.”

Calvin Everett, Harrisburg’s coach, came away pleased with the victory, though knowing a lot of work still has to be done.

“Our kids are extremely resilient, they just fight and fight and fight,” Everett said. “We showed our youth at times. We believe in Trevion and in a big moment, we give him that option.”

“Trevion played for us last year. He worked hard to make this happen. He wasn’t one of our main options, but he worked on his game and I’m not surprised by this at all.”

Harrisburg went into halftime up, 7-0, but neither team helped themselves. Both teams had touchdowns called back on penalties, both committed personal fouls, and both couldn’t seem to get out of their own way.

The Cougars did have one major spark—Williams, who completed nine of nine in the half for 93 yards. He directed a 10-play, 68-yard drive that led to the first score of the season.

During the series, Williams targeted senior Trevion Carey six times for 78 yards, which included a huge fourth  and 12 reception, that put the Cougars on Coatesville’s five-yard line with less than 30 seconds in the half.

The next play, Williams found Carey between two Coatesville defenders for a five-yard TD pass in the middle of the end zone with :03 left in the half.

In the half, both teams combined for 15 penalties for 129 yards. They were flagged a combined eight times alone in the first quarter.

“We were a little thrown off by the new 40-second rule with the procedure penalties, but that’s on us,” Coatesville coach Matt Ortega said. “It’s us making mistakes and our kids not staying completely focused.”

“It’s not on the kids. This is a program loss. It goes back to 80-percent of this team never played in a varsity game. Again, it’s not their fault. As coaches, we may have put too much on their plate. It’s something we have to look at ourselves in the mirror, and the players do, too, if we’re going to improve from this loss. It’s how we’re going to approach it.”