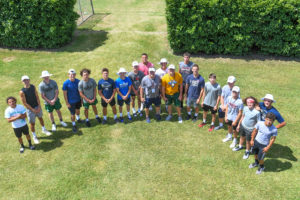 Gerry Yonchiuk can stop kicking himself. The legendary Lebanon High School coach had been asked 20 years ago to coach at the Manning Passing Academy, which just completed its 24th year. He turned it down.

But he made sure he got there this year, when Archie Manning, with his three sons, Cooper, Peyton and Eli, hosted about 1,000 quarterbacks from major Division I schools to the grade school level at Nicholls State University, in Thibodaux, Louisiana, from June 27-30.

“I turned down an opportunity to coach there (at the Manning Academy) 20 years ago, like an idiot, and I should have done it, because I would have been there every year,” Yonchiuk said, laughing. “It’s so well organized and so well run. Pennsylvania had a lot of kids there.  I brought my kid, Isaiah Rodriguez, and I was able to get Chris Danz (from Cedar Crest High School) in there, too.”

“It’s really something special; a great experience. All of the Mannings are involved, and they get right in there and break things down. They’re great people. They give everyone attention. The Mannings are regular guys and they’re good guys. Peyton is exactly the way he is in those commercials, he’s really a funny guy. Eli is the quietest of the three. Cooper is the funniest. They’re all very approachable, good guys.”

When Dartmouth coach Buddy Teevens, who started the Manning Passing Academy with Archie Manning, had asked Yonchiuk to come down to Louisiana a few decades ago to participate, Yonchiuk told him maybe someday.

“I’m kicking myself.  I should have gotten down there earlier,” Yonchiuk said. “They break things down by state, so I had the Pennsylvania kids, but they rotate things, so I also met these great kids from other states.”

“Hunter Johnson, who starts at Northwestern, was in my pod of eight coaches, and Malvern grad Alex Hornibrook, who’s now at Florida State, was right behind him, and Pitt’s Kenny Pickett. It was a who’s-who of guys. But the college guys were working it, too.”

Yonchiuk, who is a quarterback guru himself, found pleasure in dispensing his wisdom to the young people who were there.

“It was just fun,” said Yonchiuk, who arrived back home Monday July 1. “It was well worth it. I got to meet Tony Martinez, the Nebraska quarterback, who I saw an ESPN story about how he dealt with his mother’s death. I wanted to let him know how classy and mature he was in dealing with it.”

“I’m a quarterback guy, and I got to meet kids like that. I got to share some of my background and these kids got to share some of their background. It’s a fellowship thing among college and high school coaches. Meeting young men like Martinez, who was really appreciative of this stranger coming up and talking to him. He was like, ‘Coach, I really appreciate that.’ What a really cool kid. That’s what I’ll take from the experience.”

Shippensburg High School’s Zack Manning and Tunkhannock High School’s Jack Chilson, a pair of starting quarterbacks who will be starting their junior year in September, also gained from the camp.

“I was looking forward to the experience, and I’ve been going to a lot of camps the last few years, but what really stood out to me from this camp is how they broke down the mechanics of playing quarterback,” said Chilson, a 6-foot-5, 175-pounder who started the end of his freshman year. “I actually got a chance to work with Peyton.”

“The first night of camp, they had a Q&A with the 10th through 12th-grade players and I got to ask Peyton a question about preparation. I got rid of the awe aspect of being there with these stars right away. Peyton looked at me straight in the eyes when he was giving his response. The rest of camp, it was about playing this great position and whether or not his upper body was relaxed or not on his three-step drop. He gave me some real valuable advice.”

Chilson found out the greater mental preparation that goes into playing quarterback at the higher level. Peyton stressed breaking down film player-by-player that by game day, with all of the studying done, it’s a matter of reviewing your notes.

“It’s a learning experience I’ll always take with me,” said Chilson, who directed the Tigers to a 3-7 record last season with a very young team. “I got to work with Hunter Johnson and the experience to relate to those guys on a personal level was amazing.”

Manning, no relation to the Mannings in Louisiana, led the Shippensburg Greyhounds to a 10-2 record, reaching the District 3 5A second-round.

“It was always a dream of mine to meet the Mannings,” said Zack, who’s 6-foot, 175 pounds. “For me, it was a learning experience. By the end of the camp, I felt like I was that much of a better player. That meant paying attention to the little things that will make me better.”

“I got to work with (Notre Dame’s) Ian Book about screens, and he told you don’t have to be fundamentally sound all of the time to get the ball off. It’s an experience I won’t forget.”