St. Joe’s Prep puts it on the line to win the District 12 6A championship By Joseph Santoliquito

PHILADELPHIA, PA – No one said anything in the huddle. No one had to. All 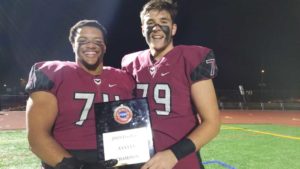 anyone wearing maroon had to do was look up at the 14-0 on the scoreboard to know the situation Saturday night against surging Northeast in the PIAA District 12 6A championship.

So, they kept their mouths shut—and plowed ahead, like they usually do.

In fact, they prefer to keep their heads down and move forward. It has a calming way of shutting off the noise.

Besides, St. Joe Prep’s offensive line would rather let their actions—and the outcome—do their talking.

They didn’t have to.

They were well fed and content—after the Hawks’ 43-26 victory over a very dangerous, and very fast Northeast team to win St. Joe Prep’s fourth-straight District 12 6A championship, 43-26, at Northeast.

Prep (8-2) will now advance to the PIAA 6A quarterfinals against Nazareth next Friday at 7 p.m. at Bethlehem Area School District Stadium. The winner would then host the winner of State College (6-1) vs Pittsburgh Central Catholic (7-1) in the state semifinals.

But none of this would not have been possible without “The Hog” up front. Playing without starting quarterback and Ohio State-bound junior Kyle McCord, who was resting an injured knee suffered the previous week against La Salle and listed as day-to-day, the Hawks, the defending PIAA 6A state champs, were a one-dimensional offense behind substitute quarterback Malik Cooper that pounded Northeast for 280 yards rushing.

Prep senior tailback Kolbe Burrell did most of the work, rushing for a career-best 217 yards on 28 carries, averaging 7.75 yards a carry, and three touchdowns.

“I’ve been with all of those guys (on the offensive line) since I’ve been at Prep, so I could tell what their tendencies are,” Burrell said. “I know them well and you can tell what will open. And they won’t do a lot of talking. I would say they go out and get it. We’re all confident as a group, and they’re more the humble type.

“I do the talking. They impose their will.”

After Northeast (11-2) bolted out to a 14-0 lead on Jon-Luke Peaker’s 85-yard run and Charles Britt’s 35-yard TD pass to Timir Jones with 2:24 left in the first quarter, Prep responded with 29 unanswered points to take control of the game.

Northeast, despite strong games from Britt, who was 11-for-22 passing for 287 yards and two touchdowns, and Peaker’s 15 carries for 131 yards, were shutout in the second and third quarters, wilting in the cold under the Prep offensive front.

“We really didn’t care what was going on, we knew we had to do our jobs,” said Stephenson, a former Howard commit who’s now opened up the recruiting process again. “A lot of it is assignments, execution and putting our heads down every single play.

“The last drive we knew exactly what to do, to be patient and be calm. Northeast was very athletic, very fast, I’ll give them credit for that. But we didn’t panic.”

“We call ourselves ‘The Hogs,’ and we come knowing what we have to do,” Lombardi said. “We have faith in Coop all of the way. You have a guy like Coop who can run a 4.3, we’ll be fine with that any day.

“Going forward, it’s the same mindset. We want to go 1-0 every week. We want to send off the seniors in the right way.”