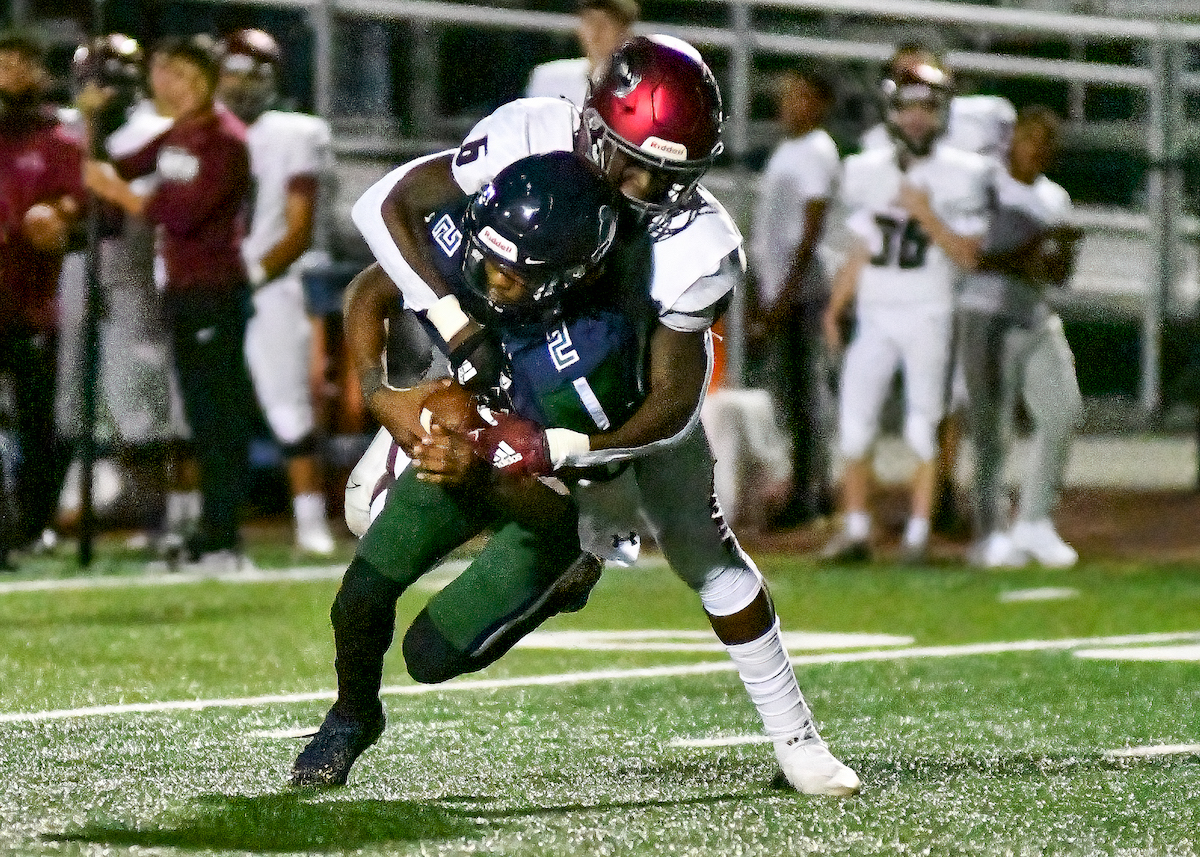 There was a time when a 6-foot-1, 220-pound high school defensive lineman was considered large. That time was about 40 years ago. By today’s standards, on a major high school level on a team that plays a national schedule, that’s considered small.

At St. Joe’s Prep, the offensive and defensive linemen call themselves “The Hogs.” It looks like the Hawks’ defensive line may merit a subtitle— “The Grunt Runts.”

“A grunt” is a military colloquialism for the infantrymen who do all of the nasty work no one else wants to do.

They’re the pointy end of the spear.

Collectively, the Hawks’ defensive line averages just over 224 pounds. It doesn’t mean that they can’t move a bigger opposing offensive line and cause havoc.

On Saturday, that’s what “The Grunt Runts” did, pushing and shoving St. Mary’s Ryken (MD) around in Prep’s 40-0 season-opening victory at the Rumble on the Raritan at Smalls Athletic Field, in York, Pennsylvania.

The Hawks were probably giving up about 30 pounds on average to St. Mary’s Ryken offensive front, and playing the schedule Prep does, that will be commonplace throughout this season.

The Hawks’ defensive front is deep, athletic and interchangeable. Everyone gets rotated in and get equal time. Against St. Mary’s Ryken, Heard started at left defensive end, with Daly next to him at left tackle, with Klick at right tackle and Dumond at right defensive end. By the second quarter, with James and Robak rotating in, the St. Mary’s Ryken offensive line was breathing heavy.

“If you think about it, we’re pretty much linebackers on the defensive line,” Daly said. “Ryken’s smallest lineman was their center, and he was 240. We work on speed and get-ups every day. I heard (Ryken’s offensive line) breathing heavy by the middle of the second quarter. You could tell they were gassed.

“It also helps that each of our d-linemen knows every position on the defensive line. There were some things we need to work on and correct. We are small, but we’re going to be faster than other teams. We hit the right gaps. We just need to hit our strike points better.”

“Our overall defense played well (against Ryken), but our defensive line played really well,” Hawks’ coach Tim Roken said. “Heard and Dumont caused problems, and our inside guys put on good pressure. Our defensive line coach, Shawn Stratz, put those guys through the hardest practices and it shows.”

Trotter was named MVP by the Rumble on the Raritan committee, though he admits he wouldn’t be able to play as fast as he does without the Grunt Runts.

“Our defensive line deserves the credit,” Trotter said. “They allow me to play fast. They keep blocks off of me and put pressure on the quarterback. It’s great to have those guys up front and the seniors lead the team. We played well, but we still have a lot to improve on.”

Heard came over from Eastern (NJ) and was playing in his game for the Hawks. He got introduced fast the level St. Joe’s plays.

“I think our defensive line can be great, but we have things to fix,” Heard said. “The skills and the talent are there. We can go six, seven deep on the defensive line and we’re always fresh. That comes from practice. We practice harder than we go in games. We also know the second guy up is as good as the starter. We did as expected.

“We work hard and we expect to shut teams out. We are small. It doesn’t mean we can’t play at this level.”

If Prep reaches December, as it usually does, the Hawks’ Grunt Runts may have something to do with it.