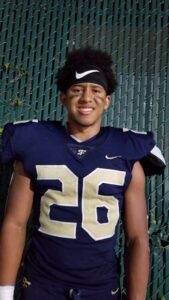 Chad Brubaker openly admitted it, in this new world of COVID-19. With limited practice, limited interaction, and limited practice time, the Spring-Ford coach knew as much about his team as he did visiting rival Perkiomen Valley Friday night.

Spring-Ford junior fullback Harry Adieyefeh rushed for a career-best 180 yards and two touchdowns on 35 carries, and senior Nick Teets carried eight times for 85, including a TD—and two touchdowns that were wiped out due to penalties.

It was utter dominance by Spring-Ford, and it was also an omen for more big nights to come.

“I never like Week 1, because you’re never sure how your team is going to react,” Brubaker said. “I think we learned that we need to finish on the offensive side. There were things we adjusted tom but kids didn’t get adjusted to during the game.

“Our defense played extremely well, but we left a lot of points off the board. We had two touchdowns called back in the second half, and there was excitement and some letdowns. We’ll look at the film and see where we made our mistakes and try to get better. That’s all you can you.”

Spring-Ford was in control by halftime. The Rams scored on two of their first three possessions. By halftime, Adieyefeh had rushed for 114 yards on 24 carries, and the Rams had pounded Perkiomen Valley’s defense for 206 yards, while giving up a mere 29 yards from scrimmage for the Vikings.

At one early juncture, Spring-Ford ran off 16 plays for 147 yards in total offense to Perkiomen Valley’s eight plays and minus-4 yards of offense.

The Vikings did not help themselves by turning the ball over four times. Upper Perkiomen is very young. The Vikings return two starters on offense and defense.

“That’s no excuse,” Perkiomen Valley coach Rob Heist said. “We pride ourselves on being able to execute, and we were dominated in all three facets of the game. I am proud of the kids and the way the fought back.

“I think our kids are resilient. But we’re thankful to even be out here right now. I’m very thankful for that. We’re going to learn from this, and put this behind us for Upper Perkiomen next week.”

Spring-Ford would like to bottle what it did and carry it through the rest of the season.

Kennedy, one of three seniors on the Rams’ offensive line, had a good idea that they push Perkiomen Valley.

“We beat them pretty bad last year with the run game, as we felt we could the same thing this year,” Kennedy said. “This was new for us, because it’s very unusual playing Perkiomen Valley this early.

“Right now, Coach Brubaker been preaching to us to take things day-by-day, and that’s what we’re doing.”