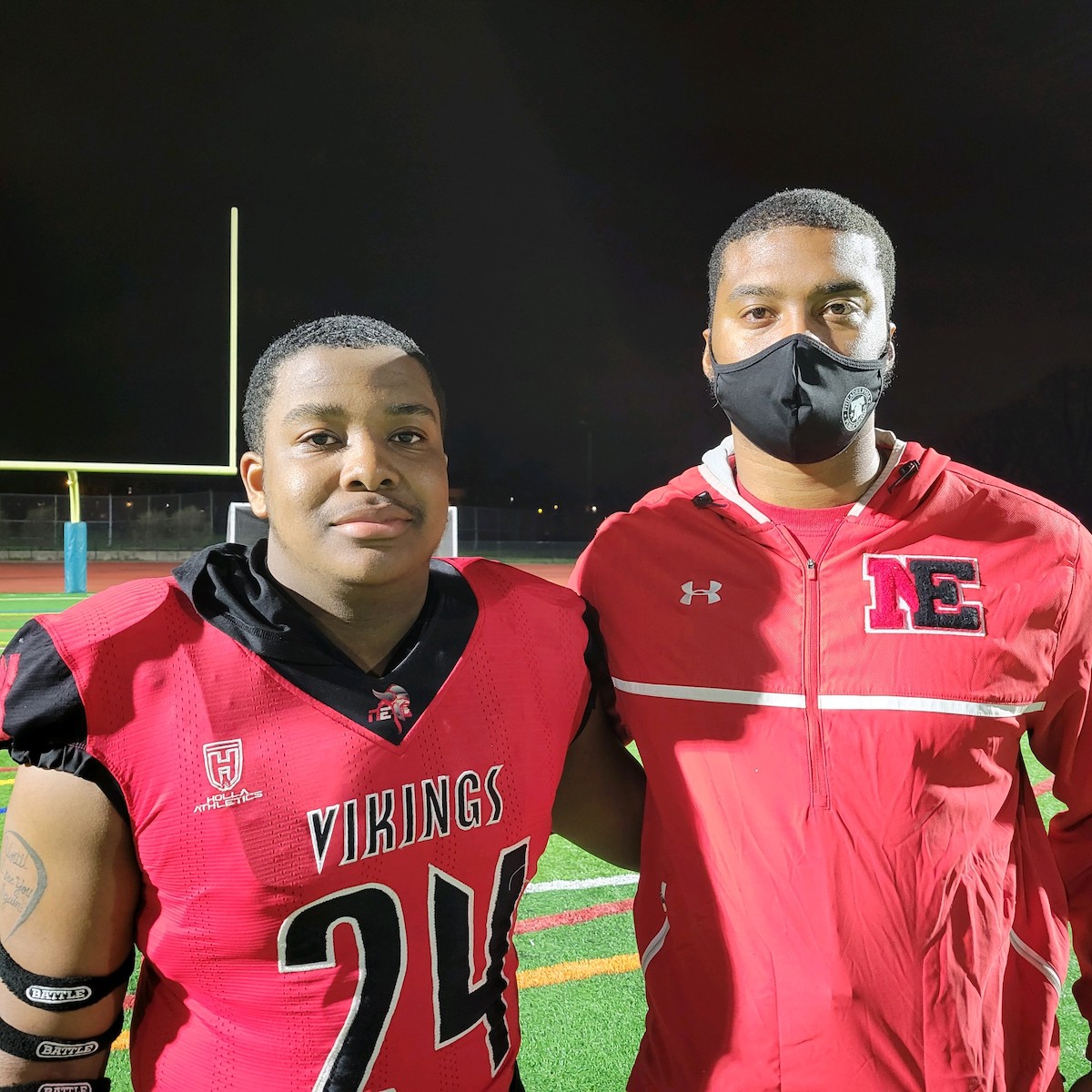 Dacare Smith understands the confusion. The Northeast High School defensive back is rather on the large side for his position, which often leaves people to think he’s a linebacker or fullback.

But the 5-foot-9 senior is a safety for the Vikings and someone who’s plunged a lot of time the previous three years into this season. Last spring COVID-19 hit, spreading an international pandemic and it looked as if Smith’s senior year—along with every other senior high school player in the nation—would be erased.

The Philadelphia Public League and parts of the Catholic League have allowed teams to play this spring and give players like Smith a chance to do what he did Friday against area powerhouse Neumann-Goretti.

Smith’s early third-quarter interception led to what eventually was the winning score in Northeast’s 22-20 victory keeping the Vikings undefeated at 5-0 this spring.

“Dacare is a great kid, who’s a great student from a great family and he patiently waited for this opportunity for three years and I’m glad he’s getting it,” Northeast coach Eric Clark said. “It was nice to see him get into the spotlight and take advantage of it against Neumann-Goretti, making a play when we needed it the most.

“We don’t win if we don’t get that interception right there. For one, it flipped the field. It’s why I’m happy for Dacare. That’s the total untold story for the whole city. If we didn’t get this chance, kids like Dacare don’t get that opportunity at all.

“What people don’t realize is that opportunities like this are life-changing. Dacare has put on some weight, and he doesn’t look like your typical DB, but he has sweet, fast feet and great character. Hopefully, this film with help open some eyes (at the college level) and give him more opportunity.”

Though the game was played on a chilly Friday night in April, the sound of crunching pads and the intensity made it feel like a playoff game in November.

There was a fiery private war going on between Northeast’s Penn State-bound defensive lineman Kenny Talley and Neumann-Goretti’s Rutgers-bound linebacker Anthony Johnson when Johnson lined up as a fullback and tight end.

Both Talley and Johnson were worth the price of admission. They went at it like two young bulls that didn’t care what china they smashed, nor who they ran over to get to one another.

The difference came off the Smith interception when Northeast’s Di’Andre Green hit Zymil Lee with a catch-and-run 43-yard touchdown reception with 6:07 to play in the third quarter. That score gave the Vikings what appeared to be a very comfortable 22-6 lead.

Slowly, the Saints crept back.

A Marqui Adams-to-Solomanie Bambara three-yard TD pass early in the fourth quarter narrowed the advantage to 22-12. A safety late in the fourth quarter turned it into a one-score game. A minute later, that score arrived, when Adams connected with Bambara for a 20-yard TD with 2:23 remaining.

But Smith, along with Talley and a handful of others came up to stop the Saints’ two-point attempt.

“This is probably the last time I’ll play football unless I decide to walk on to one of the schools who I’ve been academically accepted by,” said Smith, who’s been accepted by Millersville, Kutztown, East Stroudsburg, Bloomsburg, and others. “I was sad in the beginning when I thought we lost our season. That was my third interception.”

“People see me, though, and they think I’m a fullback or a linebacker. But I play my position and read the QB’s eyes and I undercut the post and I was right there to make the play. I’m still thinking of playing football in college. The (interception) clip may hopefully help with that.”

For Neumann-Goretti and coach Alby Crosby, the loss was a great learning experience for a young, promising team against one of the better teams in the state.

“It was a great game against a great, well-coached team and this is something for us to get better and keep improving,” Crosby said. “We want these opportunities. We want to keep getting better. We just can’t make the mistakes that we did.

“Some teams, when you’re down 22-6, you fold the tent, but we kept fighting, and that’s what I liked. We talked about creating more opportunities. We had to see what kids can get at it. Anthony Johnson is the real deal. There’s no doubt about that.”

“But our sophomore Shawn Battle played very well, and all of the kids helped themselves. My two young tackles, who had some rough times, played well, Brian Cherry and Jose Rivera. They did a really good job.”