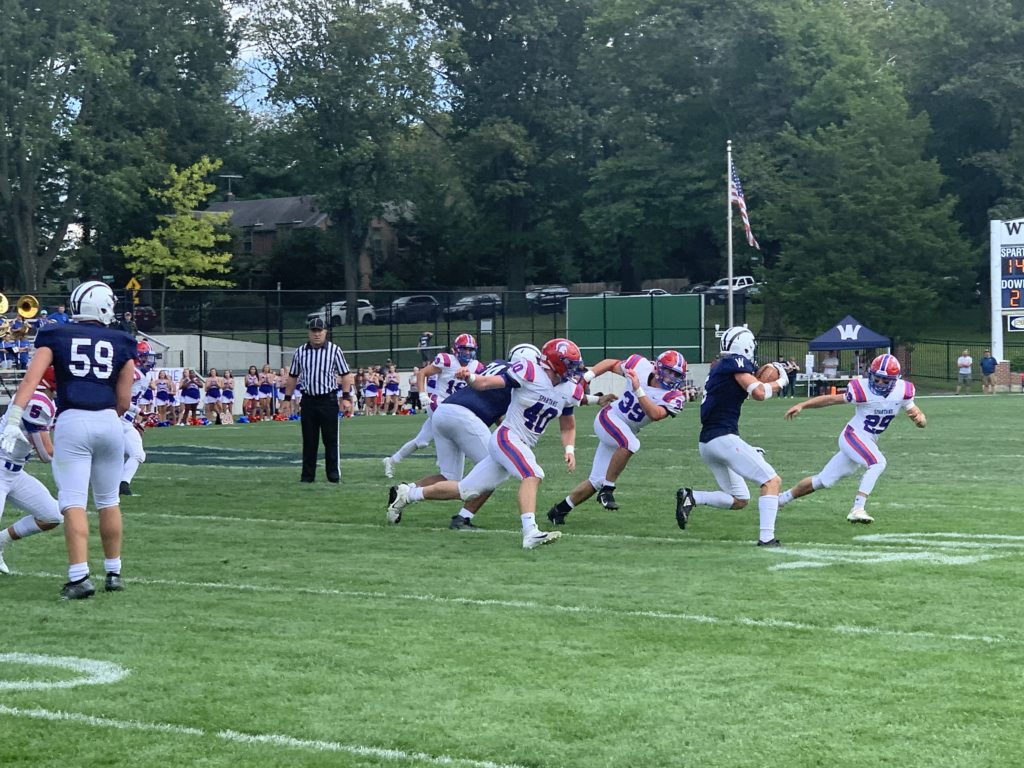 WYOMISSING – The stage was set for No.5 Wyomissing (3-0) vs. No.1 North Schuylkill (2-1) this afternoon at Wyomissing. The Spartans defense came up big in the second half, especially in the fourth quarter with a pair of fourth down stops to secure the win.

Leading the way was Wyomissing’s Jordan Auman who scored a pair of touchdowns and threw another in a 31-14 win today.

North Schuylkill turned the ball over on the opening kickoff at their eight-yard line. Wyomissing’s Braden Eberhart recovered the fumble. It would take two plays for the Spartans to get on the board. Auman hit Jevin Tranquillo for the touchdown pass. The extra point was good and the Spartans led 7-0.

On Wyomissing’s second possession, Auman went in from five yards out. They led North Schuylkill 14-0 with 3:21 left in the first quarter.

North Schuylkill cut the deficit to 14-7. Quarterback Jaden Leiby went 61 yards down the sideline for the score with 1:18 left in the first quarter.

The Spartans added to their lead. Aidan Cirulli kicked a 20-yard field goal to give them a 17-7 lead over North Schuylkill with 6:48 remaining in the first half.

Again the defense stepped up. Darren Brunner of Wyomissing had a huge interception with 3:29 left in the half to end North Schuylkill drive.

That score stood. At halftime, Wyomissing led 17-7 and received the opening second half kick.

Wyomissing turned it over on a fumble at their nine-yard line. North Schuylkill recovered the fumble with 3:37 remaining in the third quarter. Leiby went in untouched from six-yards out.  Wyomissing led is 17-14.

Wyomissing added another score late in the fourth quarter. Auman went in from four yards out.