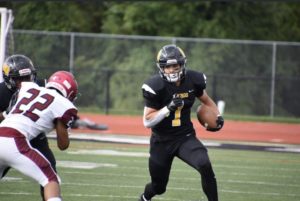 It wasn’t easy. It couldn’t have been. Tommy Santiago was all set to return to Archbishop Wood his senior year, after the 6-foot, 200-pound two-way standout rushed for 1,788 yards and 20 touchdowns his junior year.

Santiago is one of the better tailbacks in Southeastern Pennsylvania and he was attending a perennial powerhouse in Wood, which reached last year’s PIAA 5A state semifinals, where the Vikings lost to Penn Hills.

Everything was set for Santiago to be the centerpiece of Wood’s vaunted run-oriented offense.

There was just one problem: Money.

Tommy and his younger brother, Nicco, a 6-foot-2 sophomore standout guard on Wood’s basketball team, both attended the private Catholic school last year. Milt Santiago Sr., their father, is on disability and waiting for a kidney. Their mother has one job and is looking for a second. Both Nicco and Tommy couldn’t go to Wood, so something had to give.

“I told my father that I would go to (William) Tennent (the community public school) so Nicco could stay at Wood,” Tommy said. “I couldn’t deny my brother his chance. It wasn’t that difficult, because I saw how my mom and dad were having a tough time financially, and I couldn’t let my brother down.

“I had to transfer, because we both wouldn’t be able to go to Wood. More colleges are starting to reach out to me though. I’m happy this happened. I’m back with a lot of my friends. There will be a lot of people I’ll miss at Wood.”

Tommy, a strong safety and tailback, is receiving attention from Marist, Temple, Wake Forest and Division II powerhouse West Chester. After football season, Tommy plans on turning pro as a light heavyweight fighter. His older brother, Milt, is an undefeated pro who began his pro boxing career during his junior year at Tennent.

“I wish Tommy and his family nothing but the best,” Wood coach Kyle Adkins said.

Last year, Tennent finished 2-8 overall and 0-6 in the Suburban One League Continental Conference and were outscored 227 to 61 over their last five games.

No one school has stepped forward to give him a scholarship offer yet.

“The frustrating part is I don’t know why,” said Santiago, who possesses that rare blend of power and speed. “This year, I’m working harder than I’ve ever did to handle the load. A lot of schools have reached out to me, but it makes think that I have a lot more to prove this year.”

IMG Academy called and showed interest in Santiago his sophomore year, but he said he didn’t want to move away from his family. He sees himself as a running back in college. Though numerous college scouts see him a D-I safety, his tailback clips are a great selling point. He can either blow by defenders or run over them.

“I want to rush for at least 2,000 yards and pass everything I did last year, which, hopefully, will lead to getting offers from schools,” Santiago said. “I think of myself more as a power running back, but I am getting faster.”

Santiago ran a 4.5-second in the 40-yard dash at the Wake Forest camp this past spring. Two of Santiago’s interceptions were pick-sixes.

He knows every defense will be primed to stop him.

“I’m ready for it,” Santiago said. “I’m a fighter. You say it’s part of my nature. I definitely want to play college football. I’m trying to deal with it. I’ll be playing college football for somebody. I would like to do both, play football and box in college. I don’t know if I’ll be allowed to do that, though. I know I can play as well or better than some kids I have seen get D-I offers. That’s what bothers me the most. You do all of this work, you have success on the field, and you wonder what these scouts are looking at.

“The good thing is I know my brother Nicco is going to be OK.”