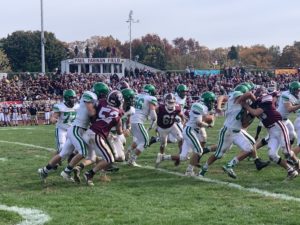 lead, they went to Conor Fehr. He scored two fourth quarter touchdowns to put the game away. The Green Knights went on to win 31-16 in the 100th meeting between the rivals at Paul Farnan Field at Bangor Memorial Park Stadium Saturday afternoon.

Pen Argyl took a 7-0 lead in the first quarter on a Gavin Amerman to Collin McKeague 38-yard touchdown pass with 4:16 left in the quarter. The Green Knights extended their lead in the second quarter. Antonio Reto took the handoff and dashed down the sidelines for the 59-yard touchdown run. Pen Argyl led 14-0 with 10:18 remaining in the first half.

Bangor’s Zach Karner recovered a fumble with 2:30 left in the first half on Pen Argyl’s 34. With 33 seconds remaining in the half and facing a fourth down and nine, Rein Farensbach hit Nate Owens for a 14-yard touchdown pass. Derek Lasher’s kick was good and Bangor cut Pen Argyl’s lead in half 14-7.

The Green Knights weren’t satisfied taking a knee right before halftime. A flea flicker from Amerman to McKeague down to the Bangor 19 with 18 seconds left in the first half, setting up a 34-yard field goal attempt. Lucas Maggipinto nailed the field goal and Pen Argyl went into halftime leading 17-7.

Coming out of halftime, Bangor cut into the Green Knights lead to 17-14. Kael Godshalk went 53-yards for the score with 11:16 left in the third quarter.

Maybe the biggest play of the game came on a quarterback sneak. On fourth down and one, Fehr got the first down with 6:00 minutes left in the game, keeping the drive alive and clock running. Fehr scored on a 26-yard run with 3:52 left in the game as Pen Argyl’s lead grew to 24-14.

Bangor gave the ball right back on their next possession. Pen Argyl’s Jace Keenhold recovered a fumble on Bangor’s 19 with 3:37 left. One play later, Fehr went 19-yards for the score.

Pen Argyl’s Gabe Hahn intercepted the Bangor pass to seal the win for the Green Knights and preserve the win in game No.100.

Pen Argyl finished the season with a 4-6 record and Bangor 2-8.