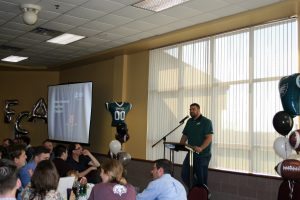 “Did any of you guys see the Super Bowl?” Philadelphia Eagle starting left guard Stefen Wisniewski asked in a deadpan.  The crowd of 300 at the April 14thFellowship of Christian Athletes Breakfast at Cairn University either roared with laughter or applauded.  Most wore midnight green.

“My wife is getting sick of me watching it!” he admitted.

There was other sports news on February 4thbesides Super Bowl LII; the Texas Rangers signed veteran pitcher Bartolo Colon to a minor league deal.  But everyone knows the big headline that day: the Eagles became World Champions.

Wisniewski didn’t enter Philadelphia’s starting lineup until week 4, a 26-24 road win at the Los Angeles Chargers.  Shockingly, the winless Chargers were favored. Philadelphia was 2-1, but they needed a miracle field goal the week before to beat a hapless Giants team.

Wisniewski’s Saturday night team Bible studies helped him through the frustration of not playing.  “Earlier in this season, I was on the bench after I had started the first five years of my career.  I was really struggling with that,” Wisniewski said.  “I remember sharing that with my brothers in Christ. They really encouraged me- guys like Jordan Hicks and Carson Wentz.  Torrey Smith and Zach Ertz sharing things they’ve gone through that helped to lift me up and later when guys were struggling, I shared things with them that really helped lift them up.  It’s a beautiful community.”

Philly got that win in Los Angeles and Wisniewski started both the next week- a 34-7 pasting of Arizona- and the Thursday after.  The Carolina Panthers were home favorites but behind a gelling offensive line, the Birds came out of Charlotte that evening with a 28-23 “W” over a previous one loss team. Fans started to realize there was something “Philly Special” about this season.

That Special culminated in the thrilling 41-33 Super Bowl win over Tom Brady’s Patriots.  Wisniewski started every other Eagles game in which he was healthy.

“It was an unbelievable experience and there are so many fun things about that game.  I had never been to the playoffs.  (The Super Bowl) is the longest two weeks of your life,” Wisniewski stated.  “We’re used to having four days of practice before games and we had ten days of practice.  We’re just like, ‘Can we play this game already?!  Let’s GO!’  And then during Super Bowl week, there are 18,000 media outlets asking you questions.  There is the Polish group asking me questions, the group from Denmark.  They had these girls from Mexico doing the Macarena with players…are we really out of things to talk about that we have to do the Macarena?

“We tried to keep it like a normal football game and stay focused: to not think about how big the moment is but work on what my job was and doing that to the best of my ability,” Wisniewski shared. “As an offense, after the first quarter and second quarter we just felt that confidence and we clicked on all cylinders.”

Wisniewski called “the Philly Special”- Trey Burton’s flea flicker fourth down touchdown pass to Nick Foles, “probably the coolest play.  When they called that play, we were so pumped. I knewthat play was going to work,” he emphasized.  “Everything was just perfect.”

For Wisniewski and Eagles fans, the game’s ending was perfect- a batted down Hail Mary gave the Birds their first Super Bowl title.

“I was so excited.  I didn’t know what to do.  You just start yelling, and running around and looking for someone to hug,” Wisniewski recalled.  “I saw some guys praying and I thought, ‘That’s a good idea. I should pray.’ It was an awesome experience.

“Probably the coolest part for me though- all of that emotion was really fun but I remember taking a minute to stop, look up to God and just thank Him.  Thank Him because ultimately, he is the one who got me there.  Through Him, I have intense, overflowing joy that is even greater than winning the Super Bowl.  It sounds crazy that having a relationship with God can be better than winning the Super Bowl, but it’s true,” Wisniewski declared.  “The success that the NFL has brought, I’m blessed and I’m grateful for it but man, none of it compares to knowing Christ.

“You always think that this is the greatest job there is and that that is going to make me happy but it’s crazy looking around the NFL locker room and seeing so many guys who are miserable. They’re just empty and confused as to ‘Why isn’t all of this money enough?  Why isn’t all of this fame enough to satisfy?’  It’s weird that in an NFL building, the people that often appear the happiest are the janitors and the cafeteria workers,” Wisniewski pointed out.  “They’re happier than the football players and that really doesn’t make sense if you believe that success and fame bring happiness.  But if you believe in what the Bible says, it makes perfect sense.”

Wisniewski shared his own Christian faith journey and how a car crash when he was 18 turned his life around.  Two weeks prior, he heard a preacher speak on Galatians 6:7: “Do not be deceived: God is not mocked, for whatever one sows, that will he also reap.”  Wisniewski, by all accounts, was a “good kid”- someone who had achieved significant academic and athletic success.

But he was also, by his own admission, a reckless driver.  One night, he drove too fast and got into a nasty accident.  “I remember standing there looking at this totaled car with shattered glass everywhere and that verse came to mind: ‘Do not be deceived. God cannot be mocked.  A man reaps what he sows.’  I remember thinking that night that I am accountable to God,” Wisniewski recollected.  “My actions have consequences.  And that really humbled me.”

Wisniewski went on to Penn State, not only starring under legendary coach Joe Paterno but also growing in his Christian walk while at Happy Valley.

The Oakland Raiders selected him in the second round of the 2012 NFL Draft.  Twice, in 2013 and 2015, Wisniewski was named his team’s “Stud” in Pro Football Focus’annual offensive line rankings.  He had a vastly underrated year in the Eagles’ Super Bowl journey.

But as thrilling as that was, Wisniewski’s message is that pursuing a Lombardi Trophy isn’t the greatest sojourn in life.  “Following Christ is a beautiful journey,” Wisniewski concluded.

For more on Stefen and the Fellowship of Christian Athletes, visit www.fca.org