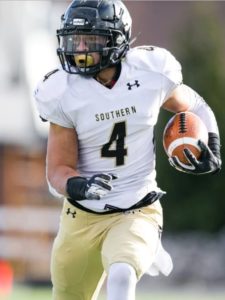 At the time of his selection, the 6-foot-2, 200-pound senior wide receiver had led the Tigers to a 15-0 record and a berth in the Class 2A state championship game. The state’s returning Gatorade Football Player of the Year, Fleming caught 68 passes for 1,448 yards and 21 touchdowns through 15 games. The state career record holder for TD receptions and receiving yards, he is a two-time Class 2A Player of the Year, ranks as the nation’s No. 4 recruit in the Class of 2020 as rated by ESPN and has been selected to play in the 2020 Under Armour All-America Game.

Also a basketball and track standout, Fleming has volunteered locally on behalf of a soup kitchen and youth sports programs. “Fleming is the most dynamic player I’ve coached against or seen play in Pennsylvania in recent memory,” said Henry Hynoski, head coach at Shamokin Area High School. “He’s a big, strong and explosive quick-twitch athlete with breakaway speed. He catches the ball over the middle too and he’s not afraid to take a hit.”

Fleming has maintained a B-plus average in the classroom. He has verbally committed to play football on scholarship at Ohio State University next fall.

As a part of Gatorade’s cause marketing platform “Play it Forward,” Fleming has the opportunity to award a $1,000 grant to a local or national youth sports organization of his choosing. He is also eligible to submit an essay to win one of twelve $10,000 spotlight grants for the organization of choice, which will be announced throughout the year.

Since the program’s inception in 1985, Gatorade Player of the Year award recipients have won hundreds of professional and college championships, and many have also turned into pillars in their communities, becoming coaches, business owners and educators.

To learn more about the Gatorade Player of the Year program, check out past winners or to nominate student-athletes, visit www.Gatorade.com/POY, on Facebook at www.facebook.com/GatoradePOY or follow us on Twitter at www.twitter.com/Gatorade.