Private Problem, Public Debate: Delving into the debate of the Public vs Private, Transfers issue 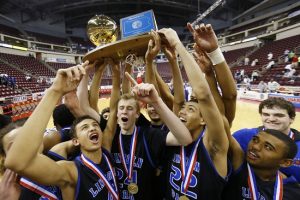 With the recent issue of transfers, private schools and unfairness it the spotlight we wanted to research and write about the issue. During a recent discussion with a friend, we were pointed to an article researched and written by Matt De George of the Delco Times and published in 2017. Since we missed seeing this article we believe many others throughout the state may have also missed it. I don’t believe anyone could do a better job covering the extremely sensitive subject so we asked permission to republish the series.

The series covers everything from the percentages of wins in the public vs private debate to the stronghold Pennsylvania’s legislative branch has put on the PIAA. Matt does a great job of filling in many of the blanks on a subject that is becoming a very heated intrusion in all PIAA sports. We urge you to read all four parts in order. I learned many new things, and I’m sure most of you will be surprised as to how difficult the situation is for all parties involved.

The topic is covered in 4 parts, please take the time to read them all. Below are the links to each part of the article:

“A disproportionate share of titles is being won by private schools, a discussion surfacing most vociferously after the football and basketball championships. But the paradigm of domination by private schools isn’t limited to even a handful of sports. The perceived imbalance fosters animosity on all sides, from allegations of lopsided playing fields to the well-worn “sour grapes” trope hurled toward the defeated.

It leads to the weaponization of terms like “recruiting” and “transfers,” manufacturing a strain of tribalism that becomes most pronounced as the postseason rolls around. It causes a large segment of the high school community to fantasize about the possibility of crowning separate champions, for public schools and non-public programs, in a bid to, as they see it, level the playing field.”

“Private schools shall be permitted, if otherwise qualified, to be members of the Pennsylvania Interscholastic Athletic Association,” reads Act 219 of 1972, which earned the signature of Gov. Milton Shapp on Oct. 16. That amendment to the Public School Code forever changed the landscape of high school sports; it remains the blind alley in which every conversation of reform invariably gets marooned………….

“We are not here today because of a single event,” Sen. Robert Robbins, R-50 of Butler County, said in 1998 (page 10 of pdf). “We are here today because of years of activities that have gone on and need to be looked into. We truly have to find out, as we look at the interscholastic sports system in Pennsylvania, what truly is best for our student athletes and go forward from here.”……..

“But Act 91, which gave the PIAA two years to comply, included this proviso: A year after the reform deadline (three years from bill passage), the Council could by majority vote “submit a proposal for the selection of a new entity to oversee the operation of interscholastic athletics in this Commonwealth.” Effectively, the Oversight Council has the authority to end the PIAA.”

“Since the 2008-09 academic year, charter schools have won eight PIAA titles. All but Imhotep Charter’s 2015 football title have occurred in boys basketball, and the Philadelphia school owns six of the championships. The others stemmed from those two all-charter boys hoops finals, the first claimed by MCS in 2011 and Lincoln Park avenging that loss in 2014.”……..

“Enter Lincoln Park Charter, which sprung from PA Cyber Charter Schools (formerly “Western PA” upon its founding in 2000). By 2002, the cyber-charter success inspired founder Nick Trombetta, the former Midland superintendent who wrote his doctoral dissertation on the district’s collapse and also taught and coached wrestling in East Liverpool, to launch a brick-and-mortar school. Performing arts would be the hook for both widespread recruitment and to entice substantial funding from Governor Ed Rendell’s administration.”

“Private schools are winning an escalating share of PIAA titles, the numbers show. The roots of the current schools arrangement in the PIAA tracks back decades, as does a frosty relationship between the PIAA and the General Assembly, which has positioned itself to influence the athletic body.”…………….

“Recruiting for athletic purposes is directly contrary to fundamental interests of PIAA and its member schools and any school engaged in such conduct should do so with the expectation that it will be treated harshly upon proof of such conduct,” reads Article VI, Section 8 of the bylaws. “Recruiting which is materially motivated in some way by an athletic purpose is contrary to the fundamental objectives of (1) keeping athletics in their proper place and subordinate to academics; (2) protecting student-athletes from ‘exploitation’ by adults and those having interests which might not be consistent with those of the student; and (3) maintaining competitive equity and a level playing field among PIAA member schools.”