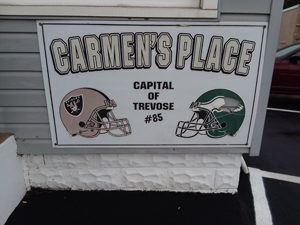 But ever fewer athletes can claim they started in the inaugural year of an iconic franchise. Cavalli can.  The Central Bucks resident was a starting defense end for the 1960 Oakland Raiders, in the Black, White and Gold’s first year of existence.

Cavalli did not play for the famed Silver and Black- that color scheme wouldn’t be adopted until 1963.

As skilled as he was in basketball- it may have been the 6’4” Cavalli’s better sport- football became his calling card.  A two-sport standout at St. Thomas More, Cavalli spent one year at Brown Prep with the intent of enrolling at Villanova.  His high school coach, Dave DiFilippo, meanwhile had met Richmond’s coach Edwin Merrick and the Spiders offered Cavalli a scholarship.

Cavalli played four seasons of football and one season of basketball at Richmond the Southern Conference was one of the few conferences that granted freshman eligibility.  Cavalli became part of a weird turn of events soon after graduation.

The Minneapolis American Football League franchise drafted Cavalli in November 1959.  On January 4th, the team folded before they began play; they would eventually become the NFL’s Vikings.

Oakland was awarded the replacement franchise on January 30th.  “According to the minutes from the ‘Special Meeting of the American Football League held March 1960,’ ‘the former Minneapolis-St. Paul draft list (now Oakland’s) was reviewed,” wrote Raiders historian Jerry Knaak, “’and it was revealed 14 players had been signed for Oakland by fellow AFL clubs.’  Buffalo had inked one.”

“In the meantime, Buffalo saw that Minnesota’s draft choices weren’t going to them so they wired me and asked if I wanted to become a Bill.  I said I was willing to go anywhere: just give me a shot,” Cavalli remembered.  “They asked what it would take.  I said, ‘Whatever.’  Buffalo said, ‘We can send you a $500 bonus.’

“Oakland called me later and said I was now their property,” Cavalli continued.  “They sent me a contract and another $500 bonus check.  Then the guys from Buffalo called: they wanted their money back!”  It was confusing, but Cavalli was now a Raider who started every game.

The 1960 Raiders, who actually played that year in San Francisco, went 6-8.  They beat the Houston Oilers 14-13 on September 25thfor their first win.  Cavalli and crew forced future Hall of Famer George Blanda into throwing three interceptions.

The defense’s best effort came five days after John Kennedy defeated Richard Nixon in the presidential election; Oakland avenged an earlier loss to the Buffalo Bills in a 20-7 win, to bring the Raiders to 5-5.

An injury sidelined Cavalli for 1961.  “Oakland had picked up my option but I hurt my wrist.  I was going to sign with them, but I was still rehabbing. They didn’t know if they could sign me because I was still hurt,” Cavalli described.

Cavalli’s old coach at St. Tommy More knew the Eagles’ front office, and the home town team offered Cavalli a shot.  Oakland granted him his release and he signed with the Philadelphia Eagles in 1962.  The Eagles’ training camp in Hershey was eventful for a number of reasons.  “We got married in Hershey.  I got married and the same week, I got cut,” Cavalli smiled. Hall of Famer Chuck Bednarik was Cavalli’s best man.

“We played in Hershey Stadium against the Baltimore Colts and Johnny Unitas was the quarterback,” Cavalli recalled.  “I had a pretty good game.  I got to him a couple of times, but they had this kid from LSU (Bobby Richards) and they were going to keep him no matter what.

“To make a long story short, I was coming off the field from my turn in the scrimmage and Pete Retzlaff said to me ‘You did well.  You’ll make this team.’  I felt really good.  We got married that weekend.  On Monday, we got off a couple of days so we went home.  When I came back, coach Nick Skorich met me in the lobby and said, ‘Carmen, I gotta let you go because we have to keep this kid from LSU.  I’m letting you go now so you can have time to get with another team.”

The Continental Football League, a 10-team Eastern seaboard league that was attempting to rival the NFL, chartered the Philadelphia Bulldogs in 1965. Cavalli and team won the CoFL championship in 1966.  Two of Philadelphia’s assistant coaches were future Temple fixture Wayne Hardin and Steve van Buren.

“The Continental Football League paid so much money that they went out of business.  They gave us $500 a week from June to December…and that was a lot of money. When I went to O’Hara, I went to the Father for forgiveness and said I had to resign because of the Bulldogs’ offer.  I had just gotten the job.  He understood,” Cavalli said.

If his Eagles career didn’t pan out, the marriage sure did.  Cavalli and wife Fritzi have been married for 56 years.  Eventually, they opened Carmen’s Place sports bar in Trevose in the late 1970s and ran it for 26 years.  Carmen’s split loyalty to the Raiders and Eagles hurt him in Super Bowl XV.  A local mechanic borrowed Cavalli’s car to “do some work on it”…and returned it painted green with an enormous Eagle on the hood.

The world champion Raiders were coached by Tom Flores, a 1960 teammate who Cavalli remembers as a “very sharp guy.”  Another member of the 1960 Raiders, Hall of Fame center Jim Otto, is still a good friend of the Cavallis.

“I was your roommate for two years and I only got two lines in your book?” Cavalli joked to Otto.  Cavalli’s extraordinary story deserves far more lines. 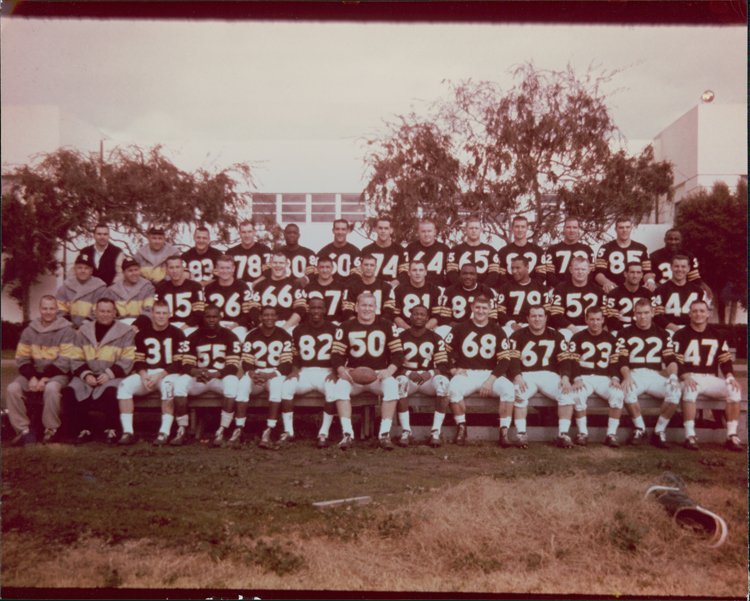 This is a 1960 team photo of the Oakland Raiders.