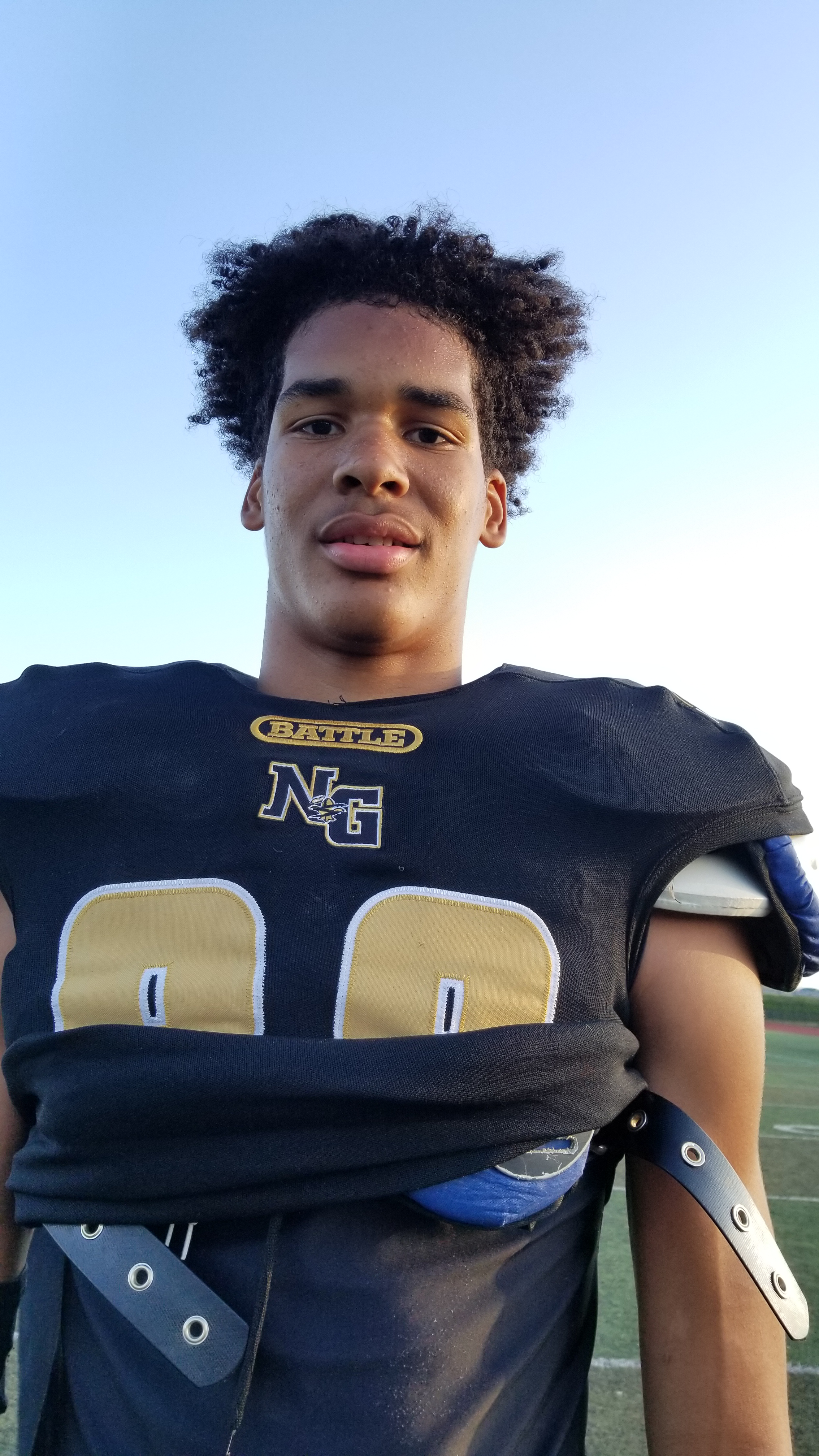 because he does everything. It also may be because he’s able to get to places on a football field, and disrupt an offense like no one else can, too.

That tends to happen when you’re a 6-foot-6, 190-pound junior outside linebacker, who’s an intelligent student of the game and is only improving in time.

So far, Gentry has received tepid interest from college recruiters, with a few offers now. Expect that to grow exponentially as Gentry grows. Last year as a sophomore, he was spindly, wisp of a spaghetti strand, barely 160 stretched over a 6-6 frame. Since then, he’s 20 pounds and continues to expand—as does Neumann-Goretti.

The Saints are 3-0 after beating Canarsie (N.Y.) on Saturday, 44-0, at the South Philadelphia Supersite, thanks in part to three Tysheem Johnson touchdowns and a stifling defense that allowed the Chiefs to cross midfield twice all game.

That’s where Gentry came in.

He has 10 sacks already through three games this year. He had 10 last season.

The holdovers vowed that they would never go through another year like that again.

“We started trusting in our younger guys, and it was small mental mistakes, and this year we’re ready to play,” said Gentry, who’s the youngest of five brothers and is targeting football for college, though he’s a starter for the Saints’ state powerhouse basketball team. “I’ve been playing football since I was five years old.

“I weigh 190 and I know I have to gain weight. A lot of coaches have been texting me this year and I think more college offers are going to come in. My goal this year is to get pay back on the people we lost to last year. I got double-teamed a lot last year, and I learned. I didn’t have the techniques I know now.”

Not only is Gentry 6-foot-6, he has a seven-foot wingspan. His arms raise and quarterback’s looking downfield immediately look somewhere else.

“Eric disrupts the game in so many different ways. Eric is a big part of the reason we’re successful this year. I hope we’re going in a good direction, and just have a good group of kids.”

Saints’ defensive coordinator Dwayne Thomas has coached seven players who are currently in the NFL. Thomas calls Gentry the best player that he’s ever coached.

“That’s because when we played seven-on-seven, Eric was our best cover guy, because he has these unique set of skills that disrupt an offense anywhere on the field,” Thomas said. “Eric can block passes, he’s extremely smart and extremely athletic. He’s also tough. You sometimes don’t see that in tall, skinny kids like Eric.

“He can rush the passer and drop in coverage. He affects the game like Jevon Kearse. I’ve never a player with his height, who can do all of the things he does. People are missing on this kid because he’s a basketball player who was 160 pounds last year. He’ll be a top-five player with his skill set when he’s a senior.

“There’s no doubt in my mind Eric is a Sunday player.”

There was someone on the field who knew Gentry was heading in that direction before anyone else—his older brother, Kalim, a 2015 Imhotep grad, whose semipro team played after Eric’s Neumann-Goretti team were done.

“Eric can be pretty special, and me my brothers all get on him about that, we’ve been doing that since his Pop Warner days,” Kalim said. “I still yell at him from the stands about taking better angles. Eric didn’t catch his growth spurt into his freshman year in high school.

“I want him to get more aggressive on the field. I’m really proud of him. He’s good, really good, but he’s only going to get better. Eric gets it. He knows his ticket is more NFL than NBA. When he’s home, we watch highlights together and breakdown film. Our whole family has love for the game, and we all try and instill that in him.”