Nazareth Special: Mehlig to Stefanik to Cabrera for the District 11 6A Title 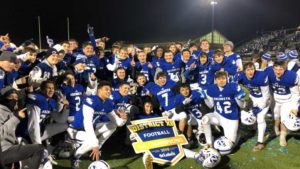 plays. Last night he saved the most SPECIAL play of the year for the Blue Eagles. With the end of regulation and the game tied at 14 the District 11 Class 6A title was decided in overtime.

Parkland struck first on a fourth down play. Angel Santos went in from one yard out. The Trojans led 21-14. It was Nazareth’s turn. After scrambling around, Anthony Harris found a seam and went in from nine yards out for the Blue Eagle touchdown. Instead of kicking the extra point Nazareth decided to go for two-point conversion.

“We just kinda thought you give the ball back to Parkland they were grinding us, punching us, and driving the ball the whole game. I didn’t think we could stop them,” said Falzone. “They were able to run the ball with ease that game. Someone has to win at some point and time. Might as well take a shot early on.”

The Blue Eagles move on to the state playoffs and face the winner of the Northeast vs. St. Joseph’s Prep game next weekend.

The game started with Parkland marching right down the field. It took nine plays for 60 yards as Ty Tremba went in from four yards out and Humza Imam’s kick put the Trojans up 7-0, with 7:39 in the first quarter.

Nazareth fumbled the ensuing kickoff and Parkland took over on their 32. Nazareth’s sack man, Jake Wilson, sacked Tremba and stopped the Trojans drive.

The first quarter ended with the Trojans leading 7-0.

Nazareth got on the board when Harris rolled left and found Stefankik for a 40-yard touchdown pass. Matt Bugbee’s kick was good. The game was tied at seven.

After a scoreless third quarter Nazareth’s defense came up with a big turnover. Ben Houchin snagged an interception to Parkland’s 22 with 7:53 left in the game. Parkland called timeout. It was fourth-and-goal for the Blue Eagles at the Trojans five. Harris hit Corey Hartranft, who some how got into the end zone for the touchdown. With 5:37 left in the game, we were tied at 14. The Blue Eagle defense came up big again. Joe Capobianco recovered a Trojan fumble with 36.5 seconds in the game.

Note: Anthony Harris threw for 201 yards, two touchdowns and one rushing touchdown. Nathan Stefanik finished the game with eight catches He is Nazareth’s All-Time receptions with 194 career catches and counting. He broke Jahan Dotson record for 187.

Parkland’s running back Isiah Rico finished the night rushing for 213 yards on 34 carries.