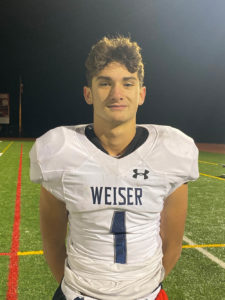 Logan Klitsch took over as Conrad Weiser’s starting quarterback in week three. “I bring more tempo. I had to earn respect from everyone, but they believe in me now. I get in the huddle, tell them what’s up, and drive the ball down the field”. On Friday, Klitsch (8 of 15 for 236 yards and 3 TDS) led the ten seed Scouts offense that racked up 384 yards and defeated the seven seed Fleetwood Tigers. Klitsch’s touchdown passes all came on screen passes that turned into long plays. “The screen game is always affective. We practice it every day. I get the ball to the play makers and they make the plays,” he said.

Fleetwood opened the scoring with its best drive of the game. The Tigers used 14 plays to travel 43 yards in six minutes and twenty-six seconds. The drive ended with a 37-yard field goal by Wes Seaman.

Conrad Weiser got on the board when Owen Dautrich (14 for 103) scampered 18 yards for a touchdown that ended a six play drive over 51 yards. The extra point put the Scouts ahead for good, 7-3.

One minute and thirty-eight seconds later, Klitsch and CJ Civiello connected for a 49-yard catch and run, one play drive and touchdown. The extra point was blocked, and the Scouts lead was 13-3.

After a Fleetwood fumble, Conrad Weiser needed two plays to score again. This time Klitsch hit Dalton Moyer for a 31-yard score and a 20-3 lead.

Fleetwood then drove 80 yards in two minutes and twenty-one seconds, helped by a Weiser roughing the passer call on an incomplete fourth down pass, and scored when Charlie Maddocks ran in from three yards out. The extra point was no good, but the Tigers cut the lead to 20-9 with 47 seconds left in the half.

The Scouts quickly drove to the Tigers 28 yard line and Matt Noll tried a 45 yard field goal with 4 seconds remaining. The kick was no good, but the Tigers were called for running into the kicker. Noll then nailed a 40-yard kick to end the half with a 23-9 advantage.

Conrad Weiser used three, third quarter touchdowns to start the running clock rule. Klitsch passed to Moyer for another score. This one from 50 yards. Dautrich had his second score of the game. This time from 1 yard out. And Klitsch scored on the ground with a 1-yard run of his own. The third quarter ended with Conrad Weiser leading Fleetwood 44-9.

The Tigers finished the scoring with Charlie Maddocks throwing to his brother, Owen, for a 28-yard touchdown, making the final score 44-15.

Fleetwood’s record setting season ends with an 8-3 record. Head Coach Sean Gaul said, “The three losses are to teams who are still alive in the playoffs. These guys have lots of heart. They were tired of being a pushover. They started working in January. The seniors wanted to be remembered for something they were good at. We set a school record for wins and they took us to districts for the first time ever. This is sour now, but the underclassmen have something to build on”.

Conrad Weiser (6-5) advances to the District III 4A quarterfinal next Friday when they travel to Milton Hershey for a 7:00pm showdown. 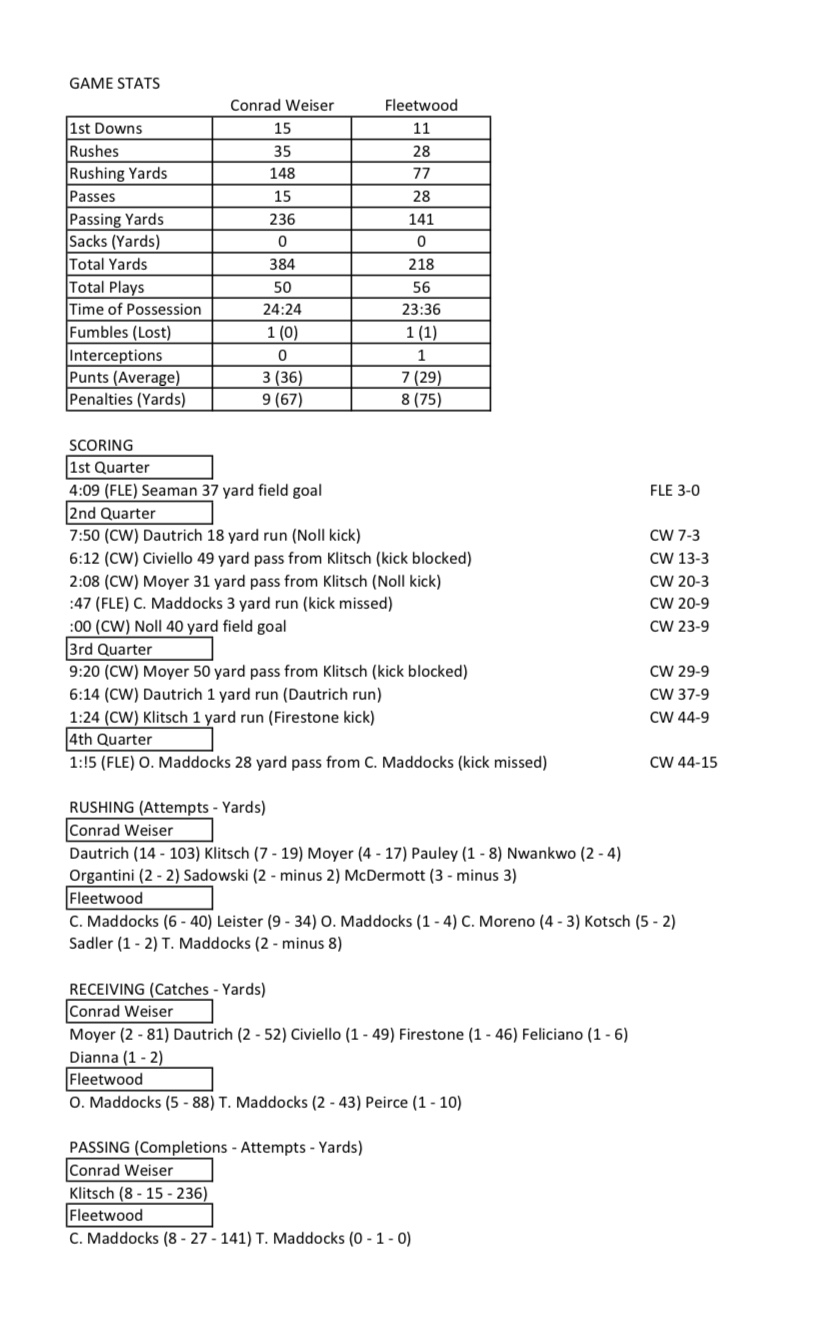