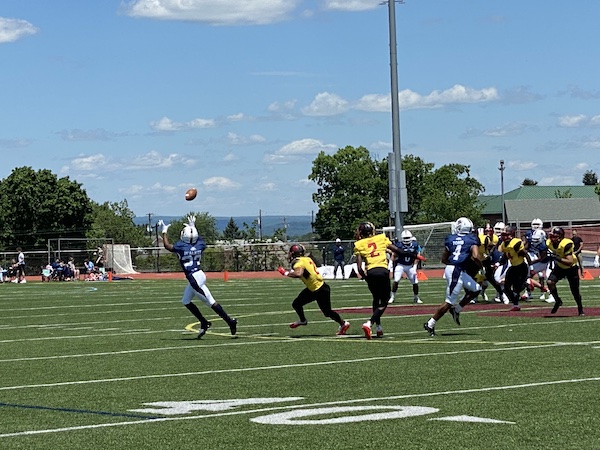 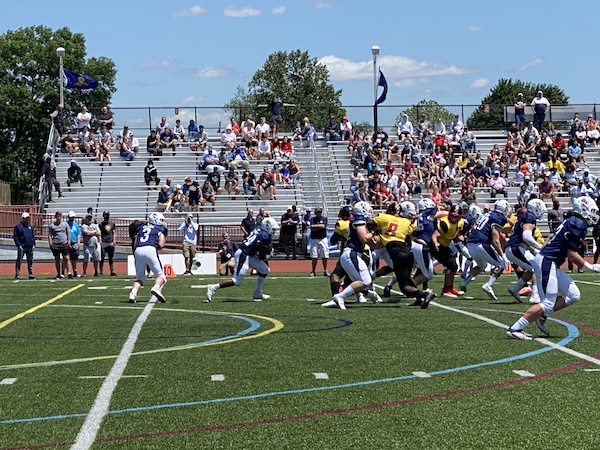 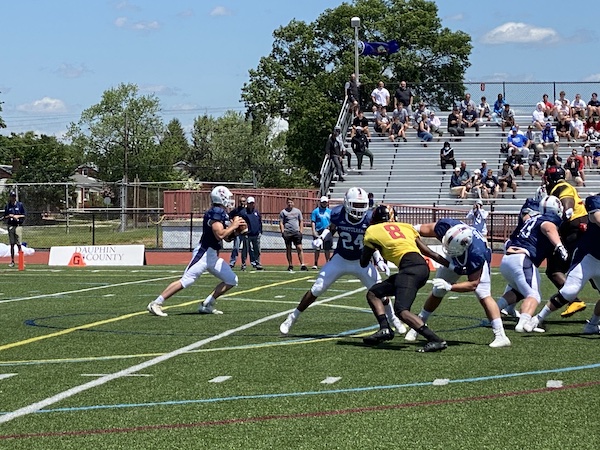 Cam’Ron Stewart thought he was set. The stellar Governor Mifflin defensive end already was packed to leave for Rutgers on Tuesday to begin his new life of football as a Scarlet Knight.

The 6-foot-5, 250-pound Stewart will be packing one more item, a large, bronze trophy as the Pennsylvania MVP after leading PA to a thorough 20-0 victory over Maryland in the 64th annual Big 33 Classic, including many of the top senior all-stars from both states, on Monday at Central Dauphin School District’s Landis Field in Harrisburg.

Stewart was everywhere, causing chaos. What’s more, he is deceiving large, even for someone 6-5.

“I put a lot of weight on over the spring, I would say about 16 pounds,” said Stewart, who had five hurries, two tackles, three assists, and two caused fumbles against Maryland. “I’m about 250 now and it feels awesome. I did a lot of prepping for this game, and I got a chance to read the Maryland offense. We had big expectations (this past season) at Governor Mifflin.

“But I have something from my senior year. I’m taking (the trophy) up to Rutgers with me. I don’t think it will scare anyone, because I have a room to myself because of COVID. This is awesome to go out this way. I could run up to Rutgers, but Nah, not now, I may have to take a nap first.”

Standing a few feet away holding Stewart’s pads was his Governor Mifflin coach, Jeff Lang. None of what Stewart did surprise him. He’s seen it countless times over the last three years.

“Cam’Ron has a natural instinct on the field, he has good speed, good quickness, good strength, he has a good nose for the ball, and good instinct on the pass rush,” Lang said. “First of all, Cam’Ron lives about a block away from me, and he is a great all-around kid who made practices fun.

“He’s going to really be missed. Rutgers got someone really good in Cam’Ron.”

That was when Manheim Township’s Penn State-bound Evan Clark hit Central York’s Judah Tomb with a 64-yard bomb for a 13-0 Pennsylvania lead with 7:20 left in the half.

Throughout the first half, Stewart caused nightmares for Maryland. He kept crashed down on Atkins all afternoon and disrupted Maryland’s attempt on a fourth-and-1 at the Pennsylvania 22 late in the second quarter.

Cooper has grown accustomed to ending his football seasons in December in nearby Hershey as an integral part of the perennial state power.

“This was a lot of fun and this was close to Hershey and I got to end it winning and scoring a touchdown,” Cooper said. “This was like a college game and a great experience. I got to hang out with these guys and getting to know them. To be on the field with dogs like this, it was a great feeling.

“It was fun. It was a wonderful way to end my high school career.”

“I don’t think there is a better way to end a senior season than like that,” said Warwick star offensive tackle Nolan Rucci, whose bound for Wisconsin and whose high school season was cut short by COVID last November. “Having this kind of opportunity to come here and end the season like this was pretty cool. I got to play one last time with some guys from my team. It might have been a little strange for my dad (former Penn State star Todd Rucci) to see me (wearing Penn State blue and white, Pennsylvania’s team colors).

“But I can’t wait to get on the red and white. I can’t wait in a few weeks to get there. This was a challenge getting this together, but I am super proud of how we all came together.”