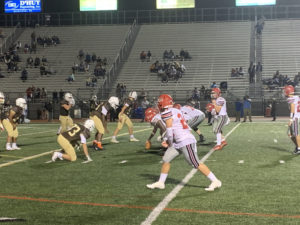 Their running attack was too much for the Trojans defense in a 44-7 win.

It was a slow start as both defenses were strong early. The Golden Hawks finally got on the board. A line drive kick by Anthony Barczynski was good from 24-yards out. With 47 seconds left in the first quarter, Bethlehem Catholic led 3-0.

A bad snap over the Parkland punter’s head set up the Golden Hawks next touchdown. Two plays later, Thomas made a nice cut and went in from 19-yards out. The Golden Hawks extend their lead to 17-0 with 4:40 remaining.

Another drive and another touchdown by the Golden Hawks. Tavion Banks got the hand off, stopped, made a cut, and went gone 32-yards for the score. Bethlehem Catholic’s lead was up to 24-0 with 2:24 left in the first quarter.

The Golden Hawks came out firing on all cylinders in the second half. Malik Thomas broke free and darted down the sidelines for a 54-yard touchdown run. The score was 30-0 with 6:13 left in the third quarter.

Parkland finally got on the board. Quarterback Ty Tremba hit Dante Medlar for a 36-yard touchdown pass. The Golden Hawks led 30-7.

The Golden Hawks followed up with another possession and another score. Tavion Banks went in for his second touchdown of the night, this time from six yards out. It was set up by a Richardson to Eric Wert 54-yard pass. They led Parkland 37-7.

Bethlehem Catholic’s defense scored the final points of the night. Steven Hattala picked up a fumble and went four yards for the score. The final score was 44-7, Golden Hawks.